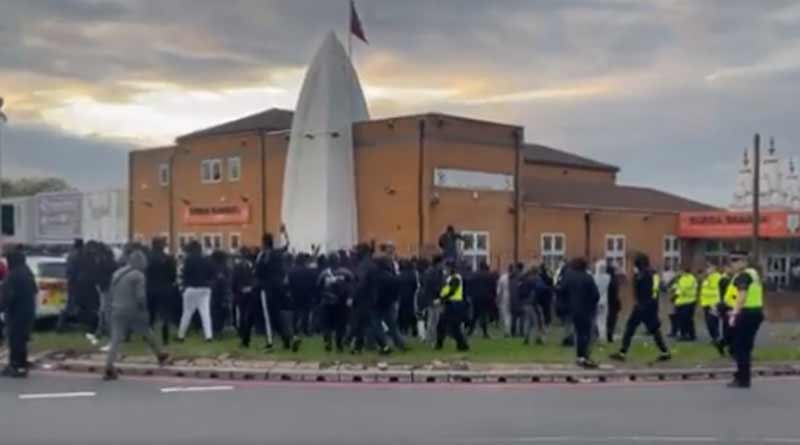 News Daily Digital Desk: In England, people of the Hindu community are being targeted again. This time the fundamentalists shouted ‘Allahu Akbar’ in front of a temple. The local Hindus were terrified after seeing this aggressive mood of about 200 Muslims.

It is known that this incident happened in Smethwick town of West Midland, England. At least 200 people from the Muslim community gathered in front of the Durga Bhavani Hindu Center temple there on Tuesday. In an aggressive mood, they started chanting ‘Allahu Akbar’. Some fundamentalists are seen climbing the temple wall. The video of the incident quickly spread on social media. Police quickly reached the spot to bring the situation under control. After several attempts, the law and order forces were able to bring the situation under control. However, there are allegations of negligence against them. Many claim that the police did not take any action when the protestors were climbing the wall.

According to local media, a social media account called ‘Apna Muslims’ called for a protest in front of the temple on Tuesday. Then the crowd gathered there. In Britain itself, such an incident has spread anxiety in the minds of expatriate Indians.

It should be noted that a few days ago, the peaceful city of Leicester (Leicester) became heated due to the unprecedented incident of communal conflict. Incidents like vandalism of Hindu temples, tearing of ocher flags led to unrest. According to the British police, there are Islamic jihadists (Islamists) behind it. Even attempts were made to keep the children of Hindu families in the area as hostages. Failing that, they ransacked the houses in the area. New Delhi strongly objected to the British government in that incident.