A meeting will be held on many social issues like removing the old vices of Maldhari society.agp – News18 Gujarati IG News Abhishek Barad, Gandhinagar: Mahameeting organized by Maldhari Mahapanchayat at Chanakyapuri, Ahmedabad. In which MLAs, former MLAs, members of Taluka Zilla Panchayat, Mun. Corporators, Saints-Mahantos, presidents of various organizations of the society, social leaders and people of the wealthy society will be present in large numbers.

When the election bells are ringing in Gujarat, along with the political parties, every society is holding a convention on some or the other topic. At such a time, Gujarat Maldhari Mahapanchayat has organized a Mahameeting at Ahmedabad on 07 August 2022 Sunday. In which dignitaries, leaders of Maldhari society will be present and there will be a discussion on various issues of Maldhari society regarding removal of old customs of the society and lumpy epidemic.

Nagjibhai Desai, spokesperson of Gujarat Maldhari Mahapanchayat, said that the Mahameeting has been organized by Maldhari Mahapanchayat at Chanakyapuri, Ahmedabad. In which MLAs, former MLAs, members of Taluka Zilla Panchayat, Mun. Corporators, Saints-Mahantos, presidents of various organizations of the society, social leaders and people of the wealthy society will be present in large numbers. This meeting will be held in two parts. Accordingly, Part-1 will be held from 10:00 AM to 12:00 PM and the second part will be held from 12:00 PM to 2:00 PM. 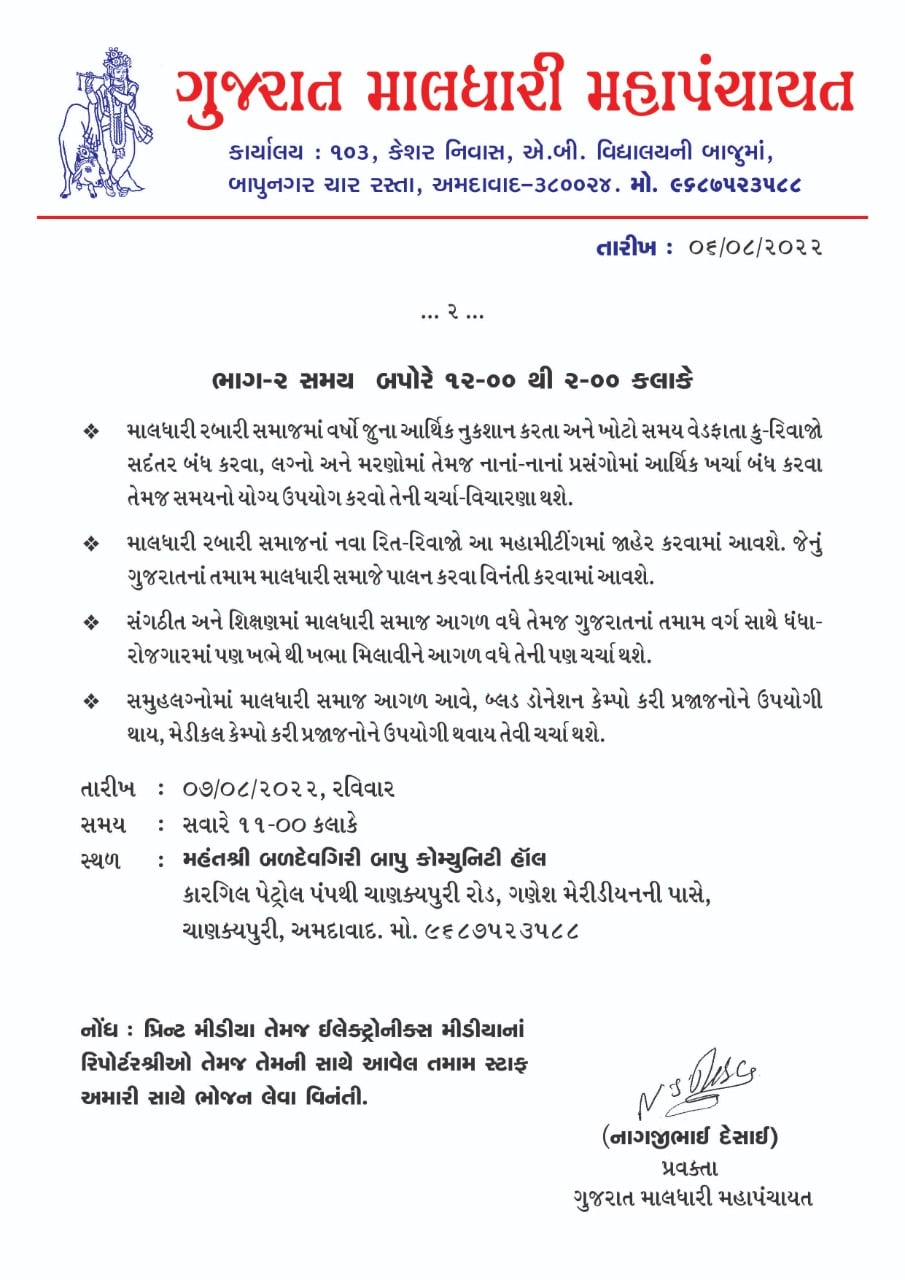 Part-1 will discuss the welfare of cattle farmers and the need to get proper help and help against the economic loss that the herdsmen have suffered due to epidemics, better medical facilities for sick cows and calves. The recently introduced cattle control black law by the Gujarat Government will discuss the fact that the maldharis living in the cities and especially the maldharis living in the 156 municipalities are deprived of their jobs by this law. consideration. The teams of Gujarat Maldhari Mahapanchayat are active in various districts for the prevention of epidemics on cows and cattle that have arrived in Gujarat.

Also Read: Bank of Baroda Gives One Locker to Three Persons; The case went to court, such a verdict, a case to be read by people keeping lockers

In part-2, there will be a discussion about stopping the social customs that cause years-old financial loss and wasting wrong time in the Maldhari Rabari society, stop the financial expenses in marriages and deaths as well as in small events and use the time properly. The new customs of Maldhari Rabari society will be announced in this grand meeting. It will be requested to be followed by all the wealthy society of Gujarat. It will also be discussed that the wealthy society should move forward in organization and education and also move shoulder to shoulder in business and employment with all classes of Gujarat. In mass marriages, wealthier society will come forward, blood donation camps will be useful to the people, medical camps will be useful to the people.

Partying video leak: Prime Minister of Finland spills… Video leak… Will he be caught in a drug test?… IG News

Supreme Court urges 6,000 eminent citizens to annul the early release of the convicts...