Amravati News | The government cheated the youth on the pretext of recruitment, alleges the Joint Employment Movement Committee IG News 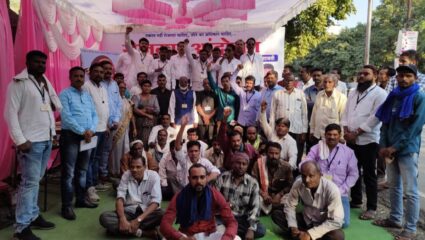 Amaravati, Various topics are being discussed in the state, but no one is ready to speak in the context of employment. The state government, which had promised to provide 75 thousand jobs, started the recruitment process and suddenly canceled it, alleging that the government is cheating the youth, has now demanded the state government to take appropriate steps in the context of unemployment. On Saturday, an employment movement was organized by the Joint Employment Movement Committee in front of the District Magistrate’s office.

The youth are feeling the jolts of unemployment. There should be recruitment for 60 lakh posts in the country. 10,000 rupees financial assistance to the unemployed every month, instead of outsourcing in the state, direct service recruitment or recruitment through MPSC, passing the National Employment Policy Act in Parliament youth, providing empty plots in MIDC to unemployed youth to start industries. At the same time at 500 places in the country, the movement was carried out in a democratic way. 3 lakh posts in the state are being filled through outsourcing instead of direct recruitment. If there is opposition to this contract system-outsourcing system, then the local legislators should raise their voice against it in the winter session.