Andy Murray says Friday’s closing of Roger Federer got him thinking about his retirement plans – and how to get higher.

More than 24 years after his debut, Swiss maestro Fed partnered with his great rival Rafa Nadal in the Laver Cup doubles.

The O2 in London will have a packed house as they face US pair of Frances Tiafo and Jack Sock.

Federer’s Team Europe teammate Murray, 35, has fought despite having hip surgery in 2019.

But he added: “As you grow up as athletes, and with some physical issues, you think about when you should stop, when is the right time and how would you like it.

“It’s impossible to know. But it feels right to me. 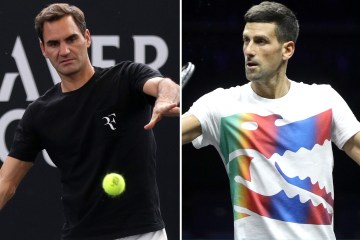 “Seeing Roger and Rafa together at the nets together and ending their careers as a team at this event.

“Bjorn Borg on the court side and John McEnroe there, Rod Laver in the stands.

“It’s going to be a really cool way to end an incredible career.

“I’ve thought about it myself but I don’t think there are many better ways to go about it. The way Roger has gone about it, how it feels with such a big decision or moment in his career, Feels a lot of things right. Does things the right way.

“That’s something we can all learn too. I think it will be emotional.

“I think it will be incredibly difficult for Roger but it will be tough for a lot of players. It feels right that this is how he will end his career.”

Yesterday the Fab Four of Federer, Nadal, Murray and Novak Djokovic played a short doubles practice match together to delight fans, paying £35 – with all proceeds going to charity.

For the record, Federer and Nadal won 3-1 – each player had a chance to serve – and the winning point was a retired 41-year-old one-handed backhander.

Nadal, 36, said: “All the wonderful things that we shared together on and off the court, it’s going to be amazing, unforgettable for me to be a part of this historic moment on Friday. I’m so excited.

“Having Roger next to me to be on the court one more time would be something I’ve been looking forward to a lot.

“Without a doubt, it is going to be difficult to handle everything, especially for Roger.