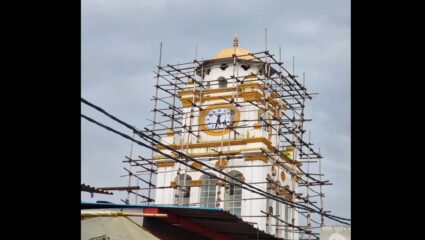 Aurangabad: The work of beautification of the historic tower located in Shahganj has been completed recently, but repairing the old clock there for years was proving to be a tedious task for the administration. Due to non-availability of agency to repair the old clock, the Aurangabad Municipal Administration has installed a new clock of electronic method there. Due to which the clock from the tower has once again started ticking and it has become easy for the residents of the city who come for shopping in the city’s main business Peth Shahganj complex to see the time.

It is worth mentioning that the historical clock tower was built in Shahganj Chaman during the Nizam period. The last Nizam Mir Osman Ali Khan had installed a large clock in this tower in 1930. In the month of Ramadan, which is considered the holiest of the Muslim community, the clock was installed in the said tower to see the time for breaking fast and fasting. During the Nizam period, the alarm of that clock used to sound to break the fast. Till a few years ago, this clock was running, but due to the carelessness of the municipal administration, the clock was shedding tears over its plight. Sneha Bakshi, the project administrator of Aurangabad Smart City, said that the then commissioner of the Municipal Corporation, Astik Kumar Pandey, knowing the historicity of the city, took up the task of constructing the said tower located in Shahganj through Smart City. Recently the construction of the historic tower has been completed. For the last few months, the officials of the Smart City Administration were busy in the efforts to repair the old clock in the tower. Many jails and agencies were searched for the repair of the clock, but when no one was found to repair the prison clock, the Smart City Administration decided to install a new electronic clock in the said tower.

so much money spent on work

Under that decision, the clock was put on Thursday. The watch is very beautiful in appearance. Sneha Bakshi informed about the facility of sounding alarm in this clock. The clock has been ticking in the tower since Thursday after the clock work was completed. Bakshi said that for the last two years, the work of 9 historical gates, fortification wall and Shahganj Tower of the city was going on. 29 lakh rupees were spent on the construction of Shahganj Tower and more than three and a half lakh rupees for the installation of clocks and bells. In the end, he told that on the instructions of Smart City CEO Dr. Abhijit Choudhary, lighting will be done on clock tower and other doors from 13 to 15 August under the ‘Har Ghar Tiranga Abhiyan’.

Shocking! There is no bridge on the river! Sons and daughters are going to cremation with their father’s body on their shoulders,...

Trump is ‘encouraging’ the DOJ to issue search warrants that led to raids ...

The case of the woman’s murder in Rakanpur was solved. After the murder, the...