Babar Azam English | You will not be able to stop your laughter by listening to Babar Azam’s English, people said – Sarfaraz Ahmed’s English is better than this IG News 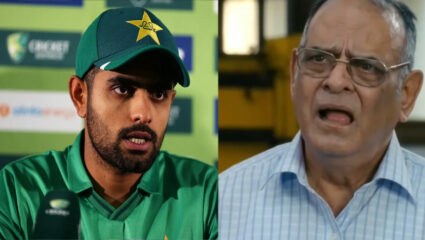 New Delhi: It has often been seen that Pakistan cricketers remain on the target of trollers due to some or the other reason. Recently, Pakistan captain Babar Azam got trolled due to his fitness. After which once again he has been trolled on social media. This time he has been trolled because of his English. This video of him is becoming increasingly viral on social media.

Actually, at this time Pakistan’s team is on the Netherlands (PAK vs NED) tour. This video of Babar Azam is from during a post match interview (Babar Azam Troll Fro His English). In which he is seen speaking English intermittently. Babar can be seen that he is stopping in between while speaking, then thinks and speaks something. Meanwhile, he also uses some words which have no meaning. Because of this, now users are trolling him a lot.

classy english made by our captain babar azam😂 https://t.co/Mv23Mu42iC

A user shared this video and wrote in the caption of his post – Former captain Sarfaraz Ahmed also spoke better English than Babar Azam.

Apart from this, another user wrote – I also speak better English than Babar Azam.

Let us tell you that this incident of Babar Azam’s English is after the second ODI match against Netherlands. In this match played on 18 August, Pakistan team defeated Netherlands by 7 wickets. In this three-match ODI series, Pakistan took an unassailable 2-0 lead.