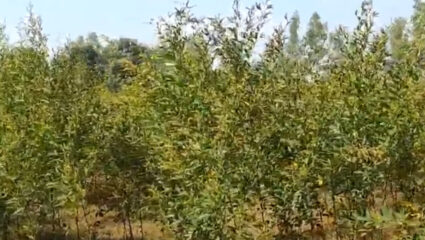 yours, Due to frequent changing weather and unseasonal rains in the last few days, gram and tur producing farmers are worried. Fungus has flourished due to fly, mosquito and moisture. Because of which all the hard work of the farmers seems to be getting ruined. Even by putting different medicines, we are not able to get rid of these diseases. Due to the change in the weather, the caterpillars have attacked the tur and gram crops. Due to which the farmers are once again in trouble and they have to face financial loss. Farmers have suffered huge losses in Kharif as well. Due to fog and change in the weather, a crisis has arisen on the tur crop. Due to increasing outbreak of caterpillars due to bad weather, farmers have to buy expensive insecticides and spray them. This year the unseasonal rains had wreaked havoc.

No use even spraying

Now the tur crop has started flourishing with pods and flowers. Due to the change in the environment for the last four to five days, the flowers of the tur crop have started falling. Along with this, farmers are expressing fear of going waste of tur crop due to increase in caterpillars. This is the condition of gram crop. The recently sprouted gram crop has been attacked by caterpillars. Farmers told that medicines are being sprinkled. But the result remains null. The crop yield has also decreased this time.

Crops get diseases every year in Kharif

Due to the continuous cloudy weather for a few days, there is concern among the chilli producing farmers due to the lack of nutritious weather necessary for the chilli crop. At the same time, due to bad weather and unseasonal rains, clouds of trouble have started hovering over the paddy crop. Due to which the fear of reduction in production has started troubling the farmers. This time the sowing of chilli crop was completed on time. Every year the crops of Kharif season get affected by various diseases. Due to which there is a decrease in production.

Dongla’s farmer Bablu Patle said that the farmers of the area always struggle due to the sky crisis. But they are ignored by the government. During the rains, sometimes there is excess rain and sometimes due to lack of rain, the farmers do not get enough crop. Then they keep hoping for the summer harvest. But here too, due to the changing weather, their crops get ruined.

Former state secretary of Congress Pramod Titirmare said that the farmer of the area is troubled by the germs affecting the crops in both the seasons. Transplanting is done by the farmers with great effort. But due to various diseases, the morsel of their mouth is taken away. Due to this, the farmers have to face financial loss every year.

‘I hope the Center will pay the due money to Bengal quickly’, claims the Governor – Khabar 24 hours IG News