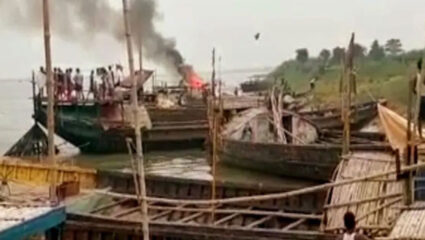 New Delhi/Patna. According to the big news coming from Patna, a cylinder blast has happened at Rampur Ghat of Maner here. In which 4 people have died. At the same time, many people were injured in this incident.

There is also news that, in fact, food was being prepared on the said boat. During this, the cylinder suddenly exploded. There has been a stir in the area after the accident. At the same time, as soon as the information about the matter was received, the police reached the spot. Police have taken the bodies in possession and sent them for post-mortem. Further investigation continues.

Life burnt in the ‘fire of hunger’! The cylinder blasted on the boat at Rampur Patila Ghat in Maner, adjacent to Danapur in Patna. The laborers were cooking food on the boat itself. So far four have died. Dozens are injured. About 20 laborers were on the boat. Edited by @iajeetkumar pic.twitter.com/bUA8ElXkRf

According to reports, about 20 laborers were on board this boat laden with illegal sand. At the same time, 4 laborers were cooking food in the hut. During this there was a gas leak and after the blast, it caught fire. Diesel was also kept on the boat. It also caught fire and 4 people got burnt after getting trapped in the side of the boat, due to which they died there.

In Sangli, a gang of 50 burglars is on the loose; 15 lakh gold and silver ornaments seized IG News

New rule for appointment of MBBS doctors in Punjab, Duty will have to be given in Mohalla Clinics first IG News

The Punjab government announced a great news to the poor ...

Who will win the ADMK general committee case? Wednesday...

32 people died due to flood in Afghanistan IG News

The case regarding portability of indigenous hunting rights in Sask. went back to...