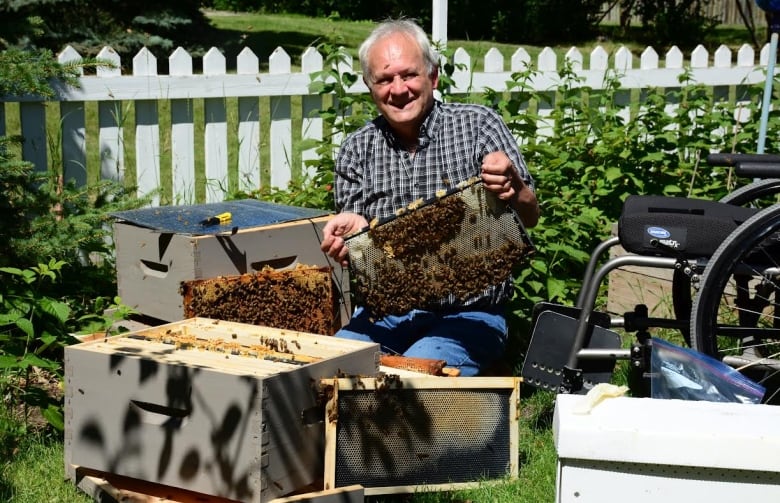 With the changing seasons, Canadian researchers say there could be further conflicts for the bee, a threatened pollinator.

“We have all kinds of wild bees, bumblebees and masons, leafcutter bees and about 300 different species of different bees, all inside Alberta alone,” said bee researcher Ron Miksha of the University of Calgary.

With climate change, those insects are thought to be in trouble.

“It’s getting warmer. There’s a climate change happening that’s making this difficult, especially for bumblebees — because the bumblebee is a cold climate type of insect,” Miksha said.

Shelley Hoover, a research associate in the Department of Biological Sciences at the University of Lethbridge, says climate change has a huge impact on pollinators.

A phenology is the impact of climate change on the timing of when things are happening, Hoover said.

“Warming is just one aspect of climate change, but we see a time mismatch between when different species are active,” she said.

This affects things such as when plants are in bloom, which means that food may not be available at the right time for pollinators.

Second, there is a change in species ranges, Hoover said, as the climate becomes unsuitable in local areas, the plants will stop growing in that area, starving to re-pollinators.

With climate change comes severe weather events such as frequent storms, floods and hailstorms, which can kill insects.

According to preliminary data, last winter, Canada had the largest loss of a bee colony in the past 20 years. A survey by Ernesto Guzmán, president of the Canadian Association of Professional Apiculturists, which surveyed commercial beekeepers nationwide, found that Alberta lost 51 percent of its colonies.

University of British Columbia researcher Alison McAfee says how bee populations can act as a good indicator or bellwether about how wild bee species are faring.

Wild species of bees tend to be more difficult to observe than their managed counterpart, the honeybee, and there isn’t the same human support behind wild bees, McAfee said.

“I would definitely say that wild bees are at greater risk of problems associated with climate change, purely because there is no industry behind them, they do not have a beekeeper who can add insulation to their nests on the ground and the like. thing,” she said.

“I can’t say that all wild bees are more vulnerable. But overall, I think they are more at risk because … they don’t have anyone specifically looking for them.”

And far less is known about wild bee populations than about honeybees, McAfee said.

In addition to climate change, monocultures and increased use of herbicides are also believed to be affecting wild bee populations.

“When people say they want to save the bees, they have a very valid concern,” Miksha said.

He said people can address those concerns by advocating for cleaner communities, which means less chemical use, less herbicide and more space for bees to pollinate, such as green spaces in cities and parks.

“The places that have not yet been cut are not excavated because these are the places where our native bees find their native flowers and also the habitat to make it during the winter,” he said.

Curious Kids: How Many Galaxies Are in the Universe? IG News

The first phase of voting has started in Gujarat IG News

The death of Shankella Robinson is being investigated as a feminism. here it means IG News