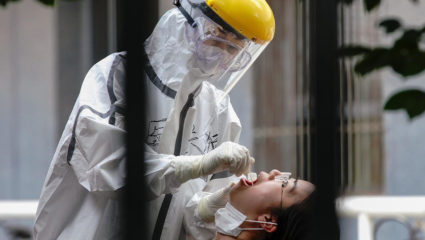 Beijing : In view of the increasing cases of Corona virus infection in China, the period of lockdown has been extended. The total population of eight districts of Zhongzhou is about 6.6 million and people there have been asked to stay in their homes for five days from Thursday. The city government has ordered a comprehensive investigation there as part of the action to deal with the infection.

Zhongzhou is in the news these days after workers at the world’s largest Apple iPhone factory were allegedly beaten and detained by police over a contract dispute. The National Health Commission said on Thursday that 31,444 new cases of corona virus infection were reported in China in the last 24 hours. These are the highest number of daily cases reported in the country since the first case of infection in China’s Wuhan city in 2019.

In Baiyun district of Zhongzhou, the movement of people was banned on Monday itself. People have been asked to stay at home till a comprehensive investigation is done. Beijing this week set up a makeshift hospital at an exhibition center and restricted movement at the Beijing International Studies University. A case of infection was reported in the university. Earlier, shopping malls and other offices were also closed in the capital. (agency)

Nearly 460,000 people in Cambodia below poverty line due to COVID IG News

Canada out of the FIFA World Cup IG News

Nearly 460,000 people in Cambodia below poverty line due to COVID IG News