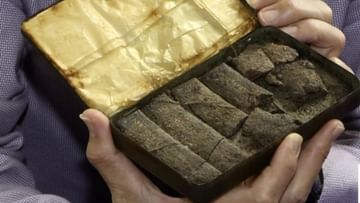 Chocolate: Just by looking at the wrapper, you would have guessed that the chocolates would be very old. But how old is it, you can know it after doing a Google search.

Like other foodstuffs, chocolate also has a specific shelf life or expiry date. Chocolate is usually perfectly fine for up to three years. But the chocolate which is being sold for 500 pounds or 45 thousand, is 123 years old. This Queen Victoria era chocolate has not spoiled even after all these years. Its taste is also intact.

A tin box was recently found in a cupboard in a house in Lincolnshire, UK. Inside that box was the chocolate made in 1899. There was not one but several chocolates inside that box. The person from whose house the chocolates were recovered, did not even realize that they were chocolates at first. Although he initially mistook the solid black blocks for rat or other animal droppings, he later smelled them and realized they were actually chocolate.

By looking at the wrapper of the chocolate, he guessed that the chocolates would be very old. But how old is it, you can know it after doing a Google search. You can find out by searching the images that these chocolates were made during the reign of Queen Victoria. The recovered chocolates were made in 1899, making them 123 years old today. After finding so many years old chocolates, the man decided to auction them. He thought that he would earn a maximum of 100 to 200 pounds by selling chocolates. But as soon as the auction started, the price went up and down, until one person finally bought the piece of chocolate for £440. The man spent a total of £519 including auction fees, which is over 45,000 in Indian prices.

It is known that this chocolate is not sold at such a high price just because it is many years old, but because of the hidden history behind its high price. It is known that Queen Victoria sent this chocolate to boost the morale of British soldiers during the war. However, the chocolate manufacturer Quakers was opposed to the war at that time and because they did not want to make a profit during the war, they sold the chocolates in tin boxes without the brand name. Very high quality chocolates were made at the behest of the Queen. Although no brand name was mentioned, the tin box was emblazoned with a picture of Queen Victoria. In small letters it read ‘South Africa, 1900’.