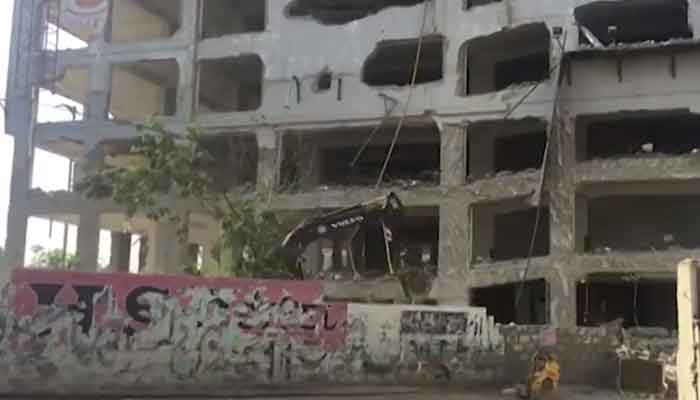 The chief justice was presiding over a hearing related to Nasla Tower’s demolition. He ordered the Karachi commissioner to ensure the process is completed within one week and submit a report on it as well.

“Till when will the process to destroy the building be completed?” asked the chief justice.

“I can provide no time frame for this,” responded the Karachi commissioner. “Two hundred people are working on it.”

In response, the chief justice told him to double the staff to “bring down the building.” He wondered why authorities were demolishing the building from the ground first.

When Jamaat-e-Islami Karachi Ameer Hafiz Naeem appeared in court for the Nasla Tower demolition hearing, the chief justice told him bluntly: “We will not allow politics here.”

Naeem asked the court to order the Sindh government to compensate the Nasla Tower affectees.

“Did you not listen to what milord said?” Justice Qazi Amin told the JI leader.

“What interest do you have in this building?” the chief justice asked Naeem.

Angered, the chief justice told the JI leader he would issue him a contempt of court notice. “No one is allowed to do politics in court,” said Justice Ijaz Ul Ahsan. “Please leave the courtroom,” he ordered Hafiz Naeem.

“Our people went to the location yesterday, it has not been demolished,” replied the chief justice.

“Yesterday, 60-65% of the building had been demolished,” replied the lawyer.

The chief justice asked the Tejori Heights attorney whether files and important records relating to the building had been retrieved from its office. The lawyer confirmed the records had been obtained.

“Work is underway to provide compensation to the affectees,” he told the court.

“Mr Commissioner, you said yesterday that the [demolition] work has been completed,” said the chief justice. “These pictures have been taken at night, if the basement remains intact, another structure will be built on top of it,” added Justice Gulzar.

“No, milord. It will not happen,” responded the lawyer. “Please grant us time to remove the building’s rubble.”