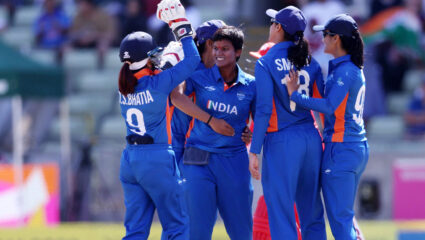 New DelhiThe Indian women’s team has reached the final in women’s cricket being played for the first time in the Commonwealth Games 2022. With this, the Indian women’s cricket team has created a new history by making it to the finals of the games. The Indian team defeated hosts England by 4 runs in the first semi-final to secure their place in the final. At the same time, cricket’s first medal in the Commonwealth Games has also been confirmed. Thanks to Smriti Mandhana’s scintillating batting and Sneh Rana and Deepti Sharma’s bowling, India have ensured this victory.

Smriti Mandhana’s 61 off 32 balls, including three sixes and eight fours, and Jemima Rodriguez’s useful knock of 44 not out helped India post 164 for five against hosts England in the semi-finals of the Commonwealth Games cricket event here on Saturday. Scored up.

Mandhana’s aggressive knock in the powerplay laid the foundation for the score while Rodrigues (seven fours) helped to increase it by an unbeaten 31-ball knock. Mandhana also scored the fastest fifty in T20 Internationals in women’s cricket during this period, for which she played only 23 balls. At the same time, Deepti Sharma contributed 22 runs in 20 balls.

The mental health of farmers is worse than that of the general public, University of Guelph survey IG News

The mental health of farmers is worse than that of...

Alyssa Healy hits a six off the second ball of the women’s hundred, but...

The Hon’ble Cabinet has given a green flag to the leave of lecturers and...