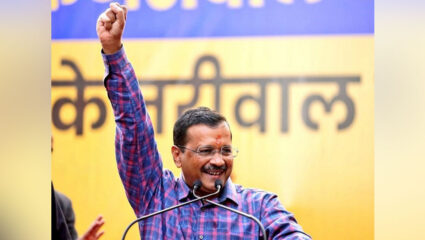 New Delhi. On one hand, the results of the Municipal Corporation of Delhi (MCD) elections are coming one after the other. At the same time, it is completely clear from the trends that Aam Aadmi Party (AAP) seems to be getting majority in this election. However, the BJP still seems to be giving more or less a tough fight. At the same time, Congress is also leading on ten seats. However, till some time ago, Congress was leading only in 4-5 seats.

AAP workers celebrate at the party office in Delhi as the party wins 106 seats and leads on 26 others as per the official trends. Counting is underway. #DelhiMCDEllectionResults2022 pic.twitter.com/9rke1EiwJf

Let us inform that, the convenor of ‘AAP’ and the Chief Minister of Delhi had earlier said that his party would register victory in 230 wards. An outright victory for the party in the MCD elections would be another example of its influence on Delhi. BJP’s Delhi unit president Adesh Gupta said, “Despite 15 years of anti-incumbency wave, our performance is better. We worked for the welfare of the people of Delhi in the municipal corporations, but maybe some people are not happy. However, there is no resentment against the BJP.”

Let us inform that, on December 4, voting was held on 250 seats of Delhi MCD. A total of 1349 candidates are in the fray in 250 wards in these elections. BJP is in control of Delhi MCD for the last 15 years. But looking at the results so far, AAP seems to be moving ahead strongly in the direction of ending the 15-year rule of BJP this time.

Zelensky, who visited Britain, asked for help from the head of Ukraine. IG News