Dragon Girl | Dragon girl became a model by getting tattoos all over her body, now not getting a job IG News 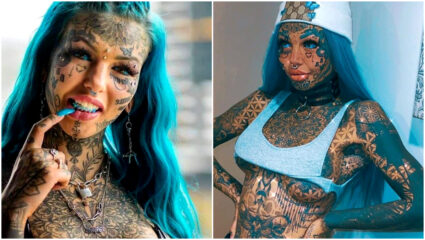 New Delhi : In today’s time, the craze of getting tattoos is seen a lot in people. Some people like to get tattoos done so much that they get tattoos done in many places on their body, but have they seen anyone being unemployed due to their tattoos. The news of a girl becoming a Dragon Girl due to a tattoo on social media is making a lot of headlines at this time.

In fact, Amber Luke, a social media influencer and model from Australia, loved getting tattoos so much that she got it tattooed on 99 percent of her body without thinking anything. Not only this, she had become so obsessed with getting the tattoo done that she did not even leave the iris of her eyes and she got them painted too. Because of which Amber Luke also became a victim of blindness for some time.

unemployed after spending all the money on tattoos

According to Amber Luke, he spent all his money to get this tattoo done. Now he has to do a job, but now no one is giving him a job because of his tattoo. To which Amber Luke says that the company should not judge him on his tattooed look, but should give him a job on the basis of his ability. Let us tell you that Amber Luke shared this problem on the Brisbane radio show.

Let me tell you, because of this tattoo of her, people started getting scared of her and started calling her Dragon Girl. Despite being blind and jobless, Amber Luke does not regret his transformation.

The University of America expressed its desire to develop the latest technology and medicine...

A grocer of Varachha became a victim of a gang of bride robbers. ...

PM has no ambition, but is ready to play a role in building opposition...