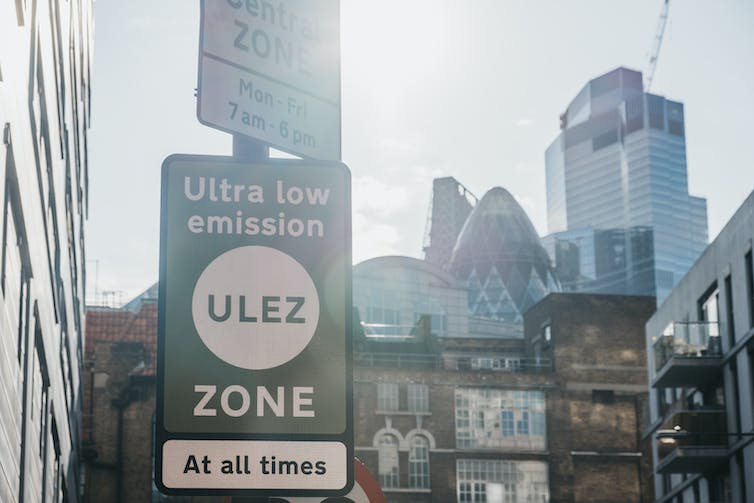 On 25 November 2022, Sadiq Khan, the Mayor of London, announced plans to expand the Ultra Low Emission Zone (ULEZ) to cover the whole of Greater London. According to Khan, this will “ensure that 5 million more Londoners can breathe cleaner air”.

While London’s air quality has improved significantly in recent years, 99% of the city’s residents still live in areas that exceed the World Health Organization’s limits for air pollution, particularly particulate matter (PM) 2.5. , which is emitted by vehicles, among other sources.

In December 2020, an inquest into the death of nine-year-old Ella Adu-Kissi-Debarah concluded that the air she was breathing was a contributing factor. This marked the first time in the UK that air pollution was reported as a cause of death.

Some politicians doubt the extent of London’s air pollution problem. However, there is widespread disagreement on what to do about it. Khan’s claim that ULEZ expansion will improve the lives of millions is, no doubt, a bold one, but one that is generally supported by evidence from London and other similar schemes. However, this cannot be the only intervention to achieve the radical improvement in air quality that is needed. Furthermore, significant questions remain over the fairness of the ULEZ expansion, particularly around its effects on lower income parts of outer London where public transport is less accessible.

How did ULEZ come about?

In February 2008, the UK capital introduced the first emissions control scheme: the Low Emission Zone (LEZ). It initially began as a fee for plying heavy goods vehicles (HGV) over 12 tonnes in the city center and five months later was extended to include HGVs over 3.5 tonnes, buses and coaches. As a result of subsequent amendments, from 2021, it has been applied to all large commercial vehicles that do not meet European emission standards, specifically Euro IV standards.

While some research has shown that early estimates of LEZ-related emissions reductions were too optimistic, there is evidence that air quality has improved. Exactly how much varies, depending on the study, from substantial to minute.

In April 2019, the Mayor of London initiated the introduction of a ULEZ – the world’s strictest low-emission zone – to cover central London. Unlike the LEZ, the ULEZ targets all motorized vehicles that do not comply with European emission standards. In October 2021, the ULEZ was extended to London’s North and South Circular Roads, increasing to 18 times its original size.

ULEZ has had an impact

Preliminary findings from the Greater London Authority (GLA) attributed a significant and positive impact on air quality to the ULEZ. Between July and September 2019, the GLA saw a 29% reduction in nitrogen dioxide (NO₂) concentrations, and between February 2017 and February 2020, a 44% reduction in NO₂ concentrations at central London roadside locations. This matches findings from similar schemes in German cities and Madrid.

Recent research using more advanced statistical methods has found small improvements in air quality. Although the improvements were still significant, these findings have led researchers of one such study at Imperial College London to conclude that “ULEZ by itself is not an effective strategy given that marginal causal effects were small”.

While the effects of ULEZs on air quality are positive, they are limited by the large proportion of vehicles that already comply and the pollution levels that are associated with other activities and vehicles. Radically reducing air pollution in London requires not only more ULEZs but a diverse set of policies implemented by local, regional and national governments.

One such policy is the Low Traffic Neighborhood (LTN), where planters and cameras block residential streets to motor vehicles. Although controversial, there is growing evidence that, in London at least, reducing LTN NO₂ levels, reducing car ownership and encouraging active travel, can reduce road traffic injuries and reduce road crime. have been successful in reducing

Is the extension of ULEZ fair?

The expansion of ULEZ should not be judged solely on the basis of whether it improves overall air quality. We must also ask: who benefits most? Is there displacement of pollution? And does ULEZ have public support?

Proponents claim that such transportation interventions are justified because they benefit residents of poorer areas who are already exposed to poor air quality. Opponents such as the London Borough of Bexley claim they reduce transport access, disproportionately impact low-income residents and displace pollution from one area to another.

Estimates regarding the expansion of ULEZ are not publicly available. However, the risk of harmful NO₂ concentrations in the most deprived areas of London is predicted to be substantially reduced by 2030 by the Central London ULEZ.

In contrast, a recent study suggested that it was unclear whether residents of poorer London areas were actually more exposed to air pollution. Perhaps more concerning, as the ULEZ expands into further areas of outer London, the same study found that low-income areas had a higher proportion of non-compliant cars as well as poor public transport. The lack of public transport access to poorer parts of outer London is a major objection of some outer London borough councils.

While questions must be asked about these effects on access and social inclusion, there is no evidence of pollution displaced from the original LEZ to surrounding areas nor its 2021 expansion, nor indeed other European low-emission zones . In fact, the surrounding areas and border roads also seem to be benefiting from the improvement in air quality.

Overall, the evidence so far from LEZ and subsequent ULEZ implementation is largely positive. It has improved air quality for millions of Londoners and there is little to suggest that its expansion will do otherwise.

However, in itself, there is a limit to how much impact it can have. To make a radical improvement in air quality, it should be implemented alongside other national, regional and local measures, from LTN to increased pedestrianisation. Most importantly, public transport in outer London must also be improved if its expansion is to be justified.