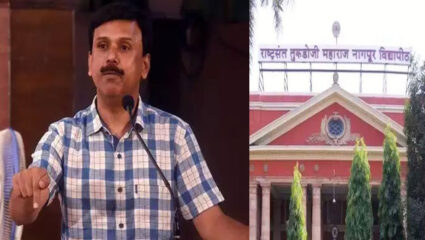 Nagpur, Rashtrasant Tukdoji Maharaj complained about sexual exploitation by 7 department heads of Nagpur University, alleging extortion on Professor Dharmesh Dhawankar of Mass Communication Department, but till now no action has been taken by the university administration. The vice-chancellor is also being accused of not taking the matter seriously. Till now Dhawankar has not even been sent on strict leave.

Responsibility of investigation entrusted to the lawyer

The university administration constituted a committee under the chairmanship of Dr. Praveena Khobragade, Principal of the Law College, to investigate the matter. Dr. Ganesh Kedar, Dr. Payal Thaware etc. were included in the committee but Dhawankar’s supporters put pressure on the committee. After this, the committee members dissociated themselves from the matter and sent a letter to the university informing them that they could not conduct the investigation. For three days the matter has again gone cold.

On Monday, the university included Ed in the panel of lawyers. Sumit Joshi has been entrusted with the responsibility of investigation. Sources said that for this neither any letter was given to Ed.Joshi by the university administration nor information was given by contacting him over the phone. The axle of the investigation was handed over by sending a message on the mobile.

It is clear from this that the university administration is also not taking interest in the matter. Simultaneously, efforts are being made to save Dhawankar. Questions are being raised on how the sole lawyer will investigate the case, whereas Senate member Babanrao Taywade has already demanded that the case be investigated by a retired judge.