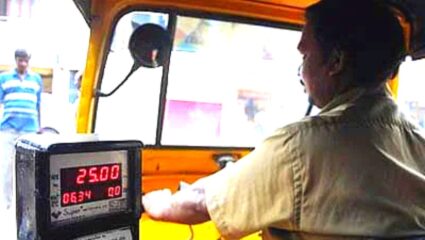 Thane : Traveling by taxi and rickshaw can be expensive now. Because the fare of auto rickshaw-taxi in the entire MMR region including Mumbai may increase from October 1. Rickshaw fares will be increased by Rs 2 and taxi fares by Rs 3. Thus the fare of rickshaw is going to increase from Rs 21 to Rs 23 and that of taxi will increase from Rs 25 to Rs 28. While the rate per kilometer has also been increased.

This decision was taken in a meeting with union officials in the presence of Industries Minister Uday Samant in Mantralaya. During this, Secretary-in-Charge Sanjeev Jaiswal, Shekhar Channe of ST Mahamandal, RTO and Traffic Department officials were present. If sources are to be believed, the notification in this regard will be issued by the concerned department soon.

Union had warned of agitation

Auto rickshaw unions in the MMR region, including Mumbai, had cited the Khatua committee report to revise taxi fares after a 25 per cent hike in fuel prices. Along with this, demanding an increase in the fare, there was a warning of agitation. The auto rickshaw union said that our operating cost has increased by Rs 1.31 per km. At present, the minimum fare for a rickshaw is Rs 21 and after the first 1.5 km the current fare is Rs 14.20 per km.

Thane Auto Rickshaw Men’s Union Secretary Chetan Ambonkar said that in the meeting held on behalf of the government, Minister Uday Samant has accepted the demand of the unions and now from October 1, the rickshaw fare has been increased by two rupees and taxi fare by four rupees. Will go