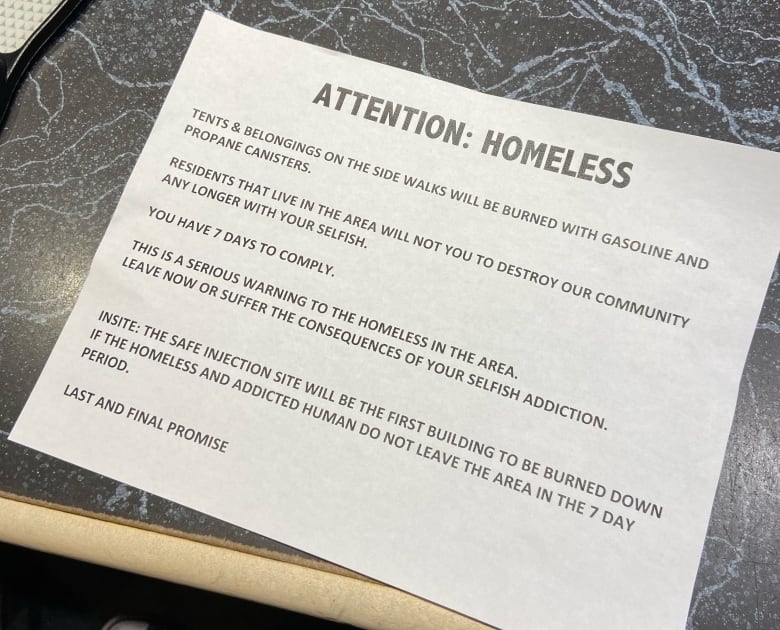 Vancouver police say they are trying to identify who is responsible for passengers distributed on the Downtown Eastside that threatened to burn down the tents of InSight, a supervised injection site, along with homeless people.

Photos of passengers threatening commuters, who give homeless people seven days to leave the neighborhood, were circulated on social media on Monday.

“We are working to identify the person or people responsible for these messages who have been deemed to have caused fear and anxiety in the Downtown Eastside,” Sgt. Steve Edison said in an emailed statement.

“Until we know more, we are asking everyone to be extra vigilant, seek our neighbors and report suspicious activity.”

Flyer says InSight will be “the first building to burn.”

The police is asking anyone to come forward with information.

Vancouver Coastal Health, which operates Insight in partnership with the Portland Hotel Society, said it is aware of the dangers to both the people of the area and their facility.

“VCH takes a zero-tolerance approach to any threat to the safety of our employees or customers accessing services at our health care facilities,” the health authority said in an email.

“As many of our clients who use substances also live with mental health concerns and trauma, it is paramount that they feel safe, secure and undisturbed when accessing essential health care, including harm reduction services. “

it today @JenStDen got from.
The out-of-home people who live on Hastings deserve our support, friendship & compassion.

This is condemnable & will not be tolerated. Those involved will be treated with the full extent of the law.

The letters arrive at a tense time in the Downtown Eastside.

Crime and disruptive behavior in Vancouver – or at least the perceptions of it – is getting a lot of attention in the news media and social media. For October’s municipal election, some candidates have made these issues central to their campaigns.

Last week, some tents began to collapse on Hastings Street, where a large camp of homeless people were under orders from a fire chief to remove their temporary homes over fire safety concerns. However, no one is able to provide accommodation for the people living there.

Last month at Langley, four people who were homeless or formerly homeless were shot, two in a deadly, one-hour-long shooting spree that ended with police shooting the alleged gunman.

A short time later, a woman sitting on the sidewalk in the Downtown Eastside was deliberately set on fire.

The senseless attacks shook the community and advocates asking them what action would need to be taken to make homeless people less vulnerable.