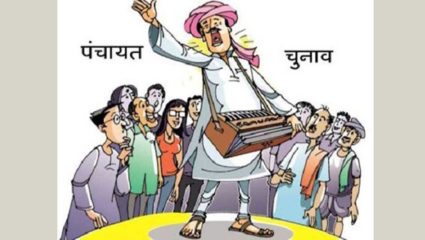 The process of election of 39 Gram Panchayats of Bhandara Tehsil will start from 28th November. Voting will be on 18 December. The counting of votes will be held on December 20. This time direct elections are also going to be held for the post of Sarpanch of these Gram Panchayats. That’s why the candidate for the post of Sarpanch has to make his own panel. Emphasis is being laid on making all types of candidates in the panel so that votes of all classes can be found in the name of the panel. Despite forming a panel, many aspirants are not satisfied. He also wants additional votes. That’s why they are trying to make hidden tie-up with other candidates who they think will not come in their panel.

This time the focus is on the effective and strong candidates in the elections. In this round, those who have more number of members in their family. Attention is also being paid to them. At present there are 23 days left for the Gram Panchayat elections. Because of this, the candidates for the post of Sarpanch have already started organizing gatherings to make the voters in their favor. Election discussions are going on in the village chaupal morning and evening for the Gram Panchayat elections. These days capable candidates are trying to woo voters in their favor. Trying to. It is discussed that from now on they are trying to use money power.

Sarpanch is being elected directly through general voters. Because of this, candidates are not easily available to make panel for Gram Panchayat member. The candidate for the post of sarpanch has to struggle hard to set up his panel. It is being told that the candidate who wants to try his luck for the post of member is appearing in the election on the condition that the main facilitator of the panel will bear his entire election expenses. Will happen.

The aspirants for the post of Sarpanch are going to spend a huge amount this time. There are 23 days left for the election. Meanwhile, the era of alcohol and kebabs has started. This time the possibility of distribution of money is being expressed.

In Jallikattu issue, enforcement of law is important, not change of practice: Supreme Court IG News

In Jallikattu issue, enforcement of law is important, not change of practice: Supreme Court IG News