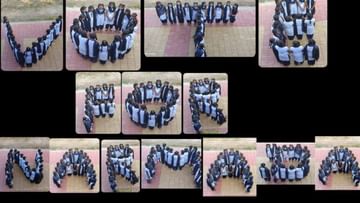 Various voter awareness programs are being organized by the district election system, under which school principal Kishore Singh Kher and the family of the school organized a human chain of “VOTE FOR NARMADA” at Nutan Jyoti Vidyalaya of Amletha village in the district to create awareness among the voters.

While 79.15 per cent polling took place in the 2017 Assembly, the voting percentage in the tribal majority district seems to be much higher. If we look at the caste equation in both seats of Narmada district, Nandod Assembly has 31 percent of Tadvi community, while Vasava community has 30 percent, Bhil tribal community has 11 percent and Patel community has 06 percent, the rest is inhabited by people from other communities.

The number of Nandod assembly voters is as follows

From Nandod assembly seat, Dr. Darshanaben Deshmukh from BJP, sitting MLA PD Vasava from Congress has been cut and youth leader Haresh Vasava has been given a ticket, while Dr. Praful Vasava who has joined Aam Aadmi Party from BTP has been given a ticket. While former municipal president Mahesh Saradh Vasava has been allotted a ticket from BTP, Harshad Vasava, former regional president of Adijati Morcha, has defected from BJP and fielded as an independent candidate. If the party towards which the Tadvi Samaj leans on the Nandod seat can be declared the winner from this seat.

Dediapada is a tribal rich area

While the Dedyapada assembly seat has 2,22,674 voters, with a tribal majority, the castes in this seat are as follows.

Here, BJP has fielded youth leader Hitesh Vasava from Dadiyapada assembly seat, while Congress has given ticket to woman capable candidate Jermaben Vasava, former executive chairman of Narmada District Panchayat Bahadur Vasava has been fielded from BTP, while former working president of BTP who joined AAP has fielded Chaitar Vasava. Tickets have been given, there is going to be a real battle between these four parties on the Dediyapada assembly seat.