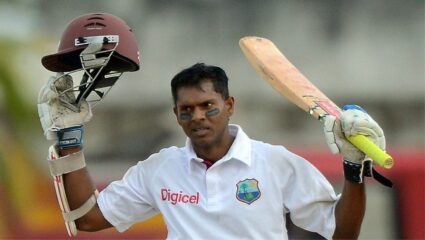 Chanderpaul is the first Indo-Caribbean player to play 100 Tests for the West Indies, and the third player after India’s Sachin Tendulkar and Sri Lanka’s Sanath Jayasuriya with an international career spanning more than two decades.

Chanderpaul made his international debut at the age of 19. But he could not score a century in international cricket for three years, which led to some criticism. Shivnarine Chanderpaul played 164 Test matches for West Indies. In which he scored 11,867 runs. In Test cricket, Chanderpaul’s bat had 30 centuries and 66 half-centuries. During this his high score was 203 not out.

Chanderpaul captained the West Indies in 14 Tests and 16 One Day Internationals (ODIs). Being a left-handed batsman, Chanderpaul is known for his unconventional batting stance. He has scored 20,000 runs in international cricket and was named by the International Cricket Council as one of five Cricketers of the Year in 2008, to be awarded the Wisden Cricketers’ Almanack, and the Sir Garfield Sobers Trophy (ICC Player of the Year). to be done.

He played his last Test match against England at Bridgetown from 1 to 3 May 2015. At the same time, his last One Day International was played against Pakistan in Dhaka on 23 May 2011. So in T20 Internationals he scored 343 runs in 22 innings of 22 matches and the last match he played was against South Africa in 2010.

Although many records are recorded in the name of Shivnarine Chanderpaul, but he also has a unique record in his name. His name is such a world record that hardly anyone knows about it. Actually, Shivnarine Chanderpaul holds the world record for seeing the most number of players being dismissed from the non-striker’s end in Tests. He has not seen one or two, but the entire 519 players getting dismissed. Indian cricketer Rahul Dravid is named after him, who has seen 453 players get out.

Shivnarine Chanderpaul retired in the year 2015 after a very long career. He made his international debut in 1994. After which he made many records in his name.