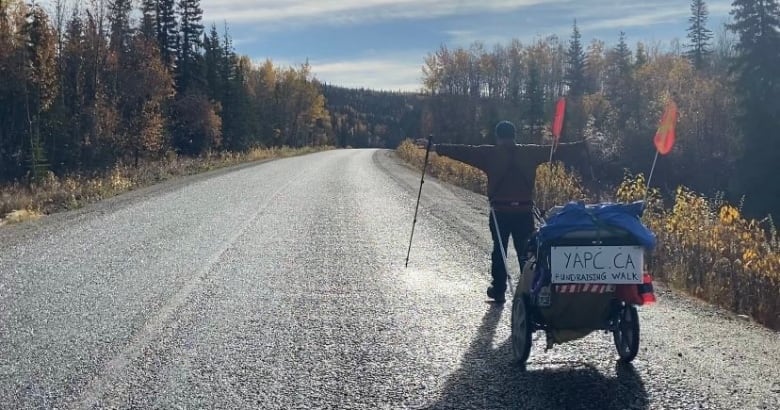 It’s the perfect fall day in Dawson City and according to Patrick Jackson a perfect day for a walk.

“It’s my way of getting in shape,” Jackson said. “You get a totally different perspective. You know, I’ve been up and down this highway hundreds of times over the years and when you’re walking on it, it’s weird because the perspective changes so much.”

But this is not a normal stroll on the highway.

Jackson is walking more than 500 kilometers from Dawson City to Whitehorse to raise funds for the Yukon Anti-Poverty Coalition and its Whitehorse Connects program.

Whitehorse Connects is an opportunity for those who are homeless, living in poverty or working among the poor to come together for a range of health and human services they can afford, including haircuts, foot care, vaccinations, internet otherwise cannot be reached. and nursing care.

“I grew up poor,” Jackson explains. “We didn’t grow up very much. I’ll never forget it and it really affected who I am and what I do so I can definitely relate.”

Jackson is not alone on his journey. They are accompanied by Butters – an Australian Shepard lent to him by a colleague.

“A coworker at work thought her dog needed some more exercise everyday, so she volunteered to lend me butters,” he explained. “So far she’s been a champion. She’s a really good dog.”

“There are a lot of people who are struggling to meet their needs, the price inflation and all kinds of changes that we navigate day to day, so that’s part of the motivation,” Jackson said.

This is not the first long walk for Jackson.

Last year he drove 2,015.2 kilometers from Dempster Corner outside Dawson City to the Arctic Circle, raising nearly $14,000 for the Yukon-Poverty Coalition.

“For me personally, if you’re going through, a couple of horns on your horn makes the next few steps easier because I realize people are supporting what they’re going through,” Jackson said.

“Food and water and things, I’m in good shape so there’s no need for things like that unless I show you the bottom or something.”