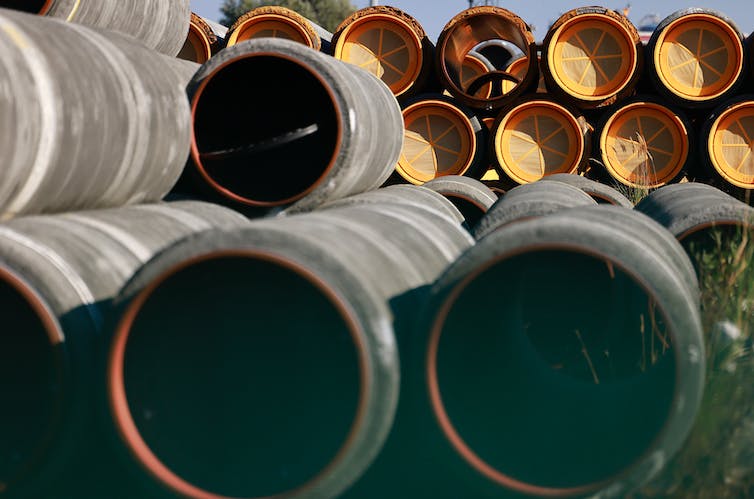 Whatever damage was caused to the Nord Stream gas pipelines in the Baltic Sea, it appears to be the first major attack on critical “subsea” (underwater) infrastructure in Europe. It is now widely thought – at least by NATO – that the explosions caused by major leaks in the two pipelines were not caused by accidents. The coalition says they were a deliberate act of sabotage.

The attacks took place in the exclusive economic zones of Denmark and Sweden and demonstrate the risks facing Europe’s sub-marine infrastructure. This raises questions about the vulnerabilities of European pipelines, power and Internet cables, and other maritime infrastructure. Europe will have to rethink its policies to protect them.

But it is not yet clear how the attack was carried out. The investigation will probably take months to complete, but there are two possible scenarios. The first option is that the attacks could be carried out as an underwater operation using advanced submarine technology.

It means we are looking at a state and its navy. Although the attacks took place outside the territorial waters of NATO members Denmark and Sweden, they can be interpreted as an act of war.

The second scenario is an operation launched from a privately owned surface vessel, such as a fishing boat being used as a platform for divers or submarines to hold explosives. As such the attack ship was hidden in daily sea traffic.

This scenario points us to a so-called “grey-zone” strategy: an attack by a group acting indirectly on behalf of the interests of the state. Then it would be very difficult to verify the involvement of any government. This scenario implies that the Nord Stream attack was likely the first recorded gray-zone activity in the European sub-sea.

Grey-zone tactics are becoming increasingly common at sea, and have been linked with confiscation of ships by the Iranian Revolutionary Guards, or advancing territorial claims to the Chinese fishing fleet.

Gray-zone tactics at sea have not been extensively studied, but similar tactics in the cyber domain are well understood. In that domain it is usually a hacker group that operates formally “independent” of the government agencies that perform the attack.

The cyber world comparison is useful because it gives us insight into why the maritime sector is very vulnerable. The ocean is more akin to cyberspace than meets the first glance.

Like cyberspace, the ocean has a highly complex set of state and non-state actors and many overlapping jurisdictions. This makes it easier to hide, and more difficult to trace and identify the actors responsible. Legal ambiguities also raise questions about how to prosecute any offender.

As our research shows, the subsea is an ocean space that is often forgotten, yet increasingly important. Pipelines ensure the flow of gas and oil. Electricity cables are the key to the green energy revolution across Europe and the Mediterranean. Underwater data cables transport 95% of the data and ensure digital connectivity.

Yet Europe has no policy that monitors and protects this underwater infrastructure. Europe is effectively sub-blind.

Three European Union agencies – the European Maritime Safety Agency (EMSA), the European Fisheries Control Agency (EFCA) and the European Border and Coast Guard Agency (Frontex) – address ocean surfaces. But none of them has the right to see underwater.

These three agencies, however, run a rigorous monitoring plan to monitor maritime activities, known as the Common Information Sharing Environment.

The first step to enhance the security of sub-marine infrastructure is to attract this platform to provide systematic monitoring of suspicious activities on the surface around the infrastructure and to coordinate patrolling. This will help deter criminals and prevent future gray-zone scenarios.

eye in the sea

Monitoring underwater activities is a more difficult and costly affair. The seabed is a vast space – and cables and pipelines cover thousands of kilometers. The European Defense Agency undertakes a number of projects to improve water monitoring.

However, as we have shown in a recent report by the European Parliament, not only is technological progress the way to better resilience. Navies and Coast Guard need to develop better collaboration with private industry that operates and maintains underwater infrastructure.

The industry holds critical data, and it is essential to ensure a quick response to any future attacks. The EU has a major role in enabling this cooperation through its agencies. It should also ensure that the industry has adequate repair capabilities for cables and pipelines.

All this calls for a clearer underwater policy for the EU and mandates its agencies to contribute to the protection of critical marine infrastructure. The ongoing drafting of the new EU Maritime Security Strategy is a window of opportunity.

Launched in 2022, the strategy aims to provide direction and ensure coordination between EU institutions and member state agencies dealing with the maritime. The strategy is expected for 2023. It should address the sub-sea and outline how underwater infrastructure can be better protected.