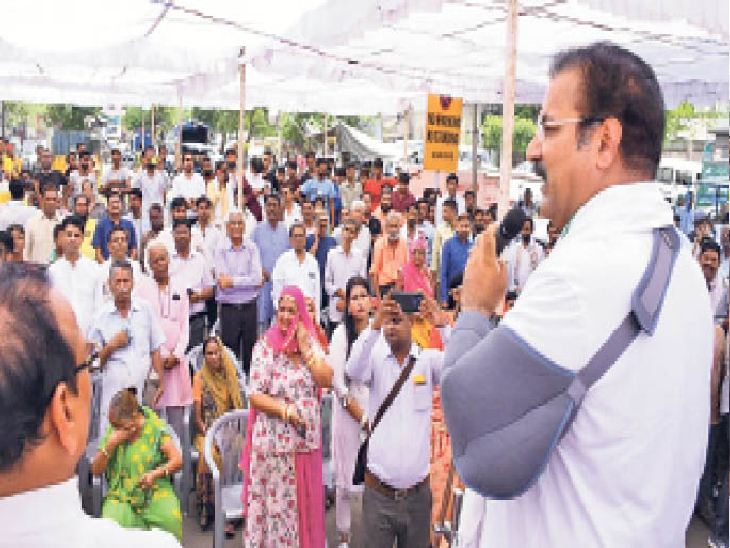 On Monday, dharna was given in all the assembly constituencies in protest against Agneepath.

The Rajasthan government is continuously protesting against the implementation of Agneepath scheme in army recruitment. On Monday also, demonstrations were held in the districts regarding this scheme. Questions are being raised that what will the youth do after 4 years? On the other hand, unemployed people of the state say that similar situation has happened with Vidya Sambal Yojana to CHA in the state. Now again in July, preparations are being made to issue an order to set up guest faculty in Vidya Sambal Yojana in government colleges of the state. These were removed about 2 months ago. Kovid Health Assistant is also staging a dharna for 86 days on the demand of jobs.

Teachers will be appointed on contract in schools and other places also. The COVID Health Assistants (CHAs) have been on dharna for the last 86 days. Ravi Chawla of Sangharsh Samiti told that the state government had imposed CHA for 28 thousand people during the Karena period. But on 31 March everyone was removed. Now they are sitting on dharna demanding appointment. Chawla said that as the Congress government is giving memorandums by protesting against Agneepath everywhere, similarly we have also put forth our demand by giving memorandums in every district. Upen Yadav of Rajasthan Unemployment Unified Federation says that there is a difference between the words and deeds of the government. Like Agneepath, youth are being cheated by putting them on contract.

1100 guest faculty were set up, now there is an increase of 87 colleges in the state
Last year itself, the state government had started the Vidya Sambal scheme and had set up about 1100 guest faculty in the new government colleges. Those who are given about 800 rupees for every period. Last year 4500 applications were received, but about 1100 were applied. Now 87 new colleges have increased. In July, an order will be issued for setting up guest faculty in this scheme. These will be imposed from the start of classes. Ramsingh Sameta, the guest faculty engaged earlier, said that if the appointment was not made back from July 1, he would stage a dharna on July 4.

Congress staged a sit-in across the state
On Monday, dharna was given in all the assembly constituencies in protest against Agneepath. Congress leaders targeted the central government and said that the Modi government, which promised One Rank One Pension in the elections, has now reached No Rank No Pension. In the demonstration in Jaipur, Minister Dr. Mahesh Joshi accused the Central Government of horse trading, while Minister Pratapsinh Khachariawas said – Government is strong in Rajasthan.