The beauty of famous Pakistani actress Aiza Khan also started to be discussed in America.

Actress Aiza Khan is a favorite actress of fans through her super hit dramas and photo shoots and now her beauty is being appreciated in America as well.

Aiza Khan, who has 9.5 million followers on Instagram, was a quiet actress a while back but now she is also active on social media, including participating in talk shows.

Aiza Khan shared a photo of herself on Instagram in which she is dressed in black and white western dress.

While this picture of the actress was liked by her fans and praised in the comments section, the American actress Samantha Stephen also praised the actress on her picture.

It should be noted that Aiza Khan had played a negative role in ARY Digital’s drama ‘Mere Paas Tum Ho’ which was well appreciated by the fans. 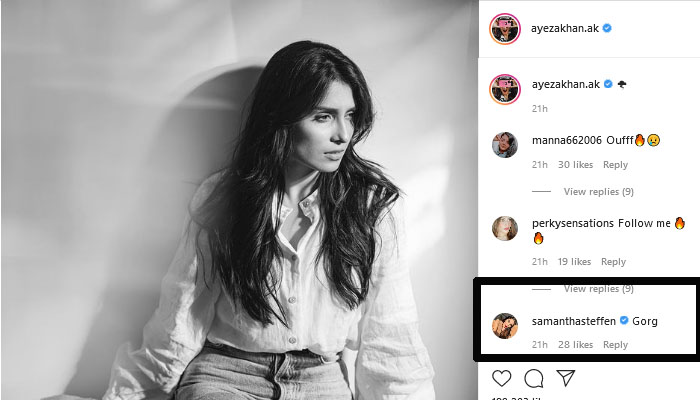 Old photo of Asim Azhar and Merab Ali in public –...

Mention of Ibn Zuhr of Andalusia who is called the Perfect...

Video of a monkey bathing her baby goes viral – IG...

The woman rescued the infant from the building – IG News

Video of a cockroach walking on the ground during a hockey...

I love my grandchildren more than Karisma and Kareena, Randhir Kapoor ...

Iqra and Yasir’s son was given a gift by his aunt ...

The time for slogans against rape is over: Mahesh Hayat –...

Angelina Jolie and Brad Pitt may have to spend huge sums...

The government should set an example by punishing the criminals: Demand...