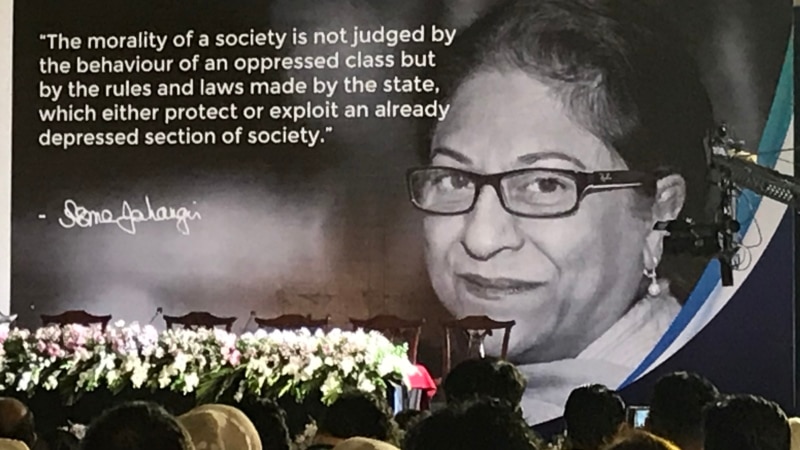 Is Pakistan’s decision to raise the issue at the diplomatic level right?

The Pakistani government has decided to take up the matter with the countries concerned through the Foreign Office, expressing reservations over the alleged funding of the Asma Jahangir Conference by foreign organizations.

Federal Minister for Information and Broadcasting Fawad Chaudhry says the Foreign Office will raise the issue of foreign funding under Article 41 of the Vienna Convention.

However, legal experts believe that the government can raise this issue at the bilateral diplomatic level, but there is no legal forum for this.

Article 41 of the Vienna Convention of 1961 is based on diplomatic relations between countries, according to which no country shall interfere in the internal affairs of another country.

It may be recalled that a conference was held in Lahore last week in the memory of prominent human rights lawyer Asma Jahangir, the inaugural session of which was addressed by Chief Justice of Pakistan Gulzar Ahmed.

Former Pakistani Prime Minister Nawaz Sharif addressed the concluding session of the conference in London, to which government ministers said that inviting the courts to address the wanted person was tantamount to mocking the constitution.

Talking to VOA, he said that the government of Pakistan does not have any law or forum available to take this issue.

He said that the decision of the government to take up the issue of foreign aid at the diplomatic level with these countries was foolish and doing so would tarnish the image of the state of Pakistan.

Barrister Zafarullah says that there is no law in Pakistan which prohibits taking funds from abroad. However, the company has to state this in its annual statements.

He said that under the Kerry-Lugar Bill, most US aid was provided through non-governmental organizations.

He says if the government protests at the diplomatic level, it will become a political issue and the world will say that NGOs are being obstructed.

According to him, when the previous government objected to such an issue, they were told that it could be raised at the diplomatic and political level. But legally there is no law in the world that can bind it.

Conference organizers and the Supreme Court Bar Association have denied the government’s allegations.

A statement issued by the Supreme Court Bar Association said that the progressives reject the allegations leveled against them for pursuing any agenda other than strengthening democracy in Pakistan.

He said that his organization conducts its own audit on an annual basis and returns are submitted to the government. So they have nothing to hide.

According to him, federal ministers have been addressing the conference in recent years, then why the issue of foreign funding was not raised? What’s the point of closing this forum if you don’t like something?

Maneza Jahangir said that they keep the forum open for all but it is not possible for us to invite people as per the wishes of the government or not.

He said that under Articles 19 and 19A, everyone has the right to speak and the law does not prevent a convicted person from expressing his views.

He said it was his right to know what his political leaders thought.

He said that Supreme Court Bar Association and Pakistan Bar Council Asma Jahangir are part of the conference.

It may be recalled that shortly before the address of the conference through the video link of former Prime Minister Nawaz Sharif, the internet connection was allegedly cut off due to which Nawaz Sharif had to address by telephone.

It is believed that a Pakistani court has declared Nawaz Sharif a fugitive while the Pakistan Electronic Media Authority (PEMRA) has banned him from appearing in the media as a fugitive and publishing his statements in newspapers.

The Winter Olympics will be scheduled for 222, China

3 students killed, 8 injured in school shooting in US

The dollar lost 52 paise in the interbank market

35% revenue collected in 5 months of this year: PM

Jupiter constellation from FebruIG 19 to March 20