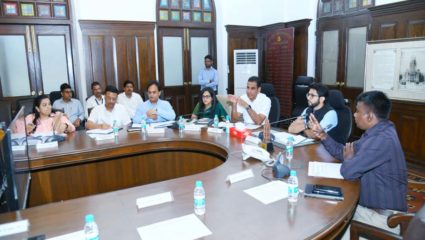 Mumbai: There has been a tussle between Shiv Sena-BJP over the drain cleaning to be done in Mumbai before the monsoon. Environment Minister Aditya Thackeray claimed that 78 percent of Mumbai’s drains have been cleaned, while the BJP has termed the municipal administration and environment minister’s claim of cleaning the drain as speculative market figures. BJP said that the administration and environment minister are cleaning hands in the name of cleaning the drain. If someone dies in monsoon, then it will be the responsibility of these people.

Aaditya Thackeray inspected the drain cleaning being done in Mumbai late at night. Thackeray held a review meeting on drain cleaning with BMC powers. He told the Journalists’ Council that the cleaning of 78 percent drains in Mumbai has been completed before monsoon.

In the review meeting, Thackeray directed the BMC officials to take necessary steps immediately at the places prone to landslides in the hilly areas. Three units of NDRF are presently stationed in Mumbai. Apart from these three units, three more units of the National Disaster Response Team will be deployed in areas prone to landslides during the monsoon season this year. Additional units of NDRF will be permanently deployed in ‘S’ ward, ‘M West’ ward and ‘N’ ward of BMC. Each unit of NDRF has 45 personnel. Three units of 135 personnel are always active in the BMC area. In addition, three more units, comprising 135 vehicles, will be on standby during the monsoon season in case of emergency. Thackeray said that action is being taken to provide alternative accommodation to the citizens living in the landslide prone area.

Reviewed the pre-monsoon preparedness with BMC Administrator Iqbal Singh Chahal ji, AMCs, DMCs, Asst.Commissioners and other officials. The work on various preventative measures is on track and @mybmc is geared up to ensure safe a monsoons ahead. https://t.co/FiMGNeMjBf

The work of cleaning the drains continues

Thackeray said that pre-monsoon siltation work is going on as per the schedule. The concerned officers should visit their area and review the progress work and complete the work on time. Thackeray has directed to pay more attention to roads and roads in BMC area during monsoon. Plan road works for the next three years as a long-term measure and implement them as planned.

BJP MLA Ashish Shelar termed Thackeray’s claim in the Journalists’ Council as a bundle of lies. Shelar said that the figures put up on the BMC website are the statistics of Ratani Khatri’s gambling, betting. Only 35 percent cleaning has been done in direct. BMC and Shiv Sena will be responsible if there is loss of life and property of the citizens of Mumbai. Shelar said that we took stock of 19 drains in the last two days. Everywhere there is a pile of garbage in the drains.

what were you doing in the dark

Shelar said that after our tour is announced, Aaditya Thackeray goes out at night to inspect the drain cleaning. What was Aditya Thackeray doing in the dark of night? In the morning the municipal corporation is running as the municipal corporation has no plan to save the Mumbaikars from drowning. Shelar said that in comparison to last year, a more budget of Rs 162 crore has been given for cleaning the drain, but the amount of silt that should have been removed from the drains, but less mud has been removed from the drains.

50% of the trees were not pruned

BJP leader Shelar said that he said that 50 per cent of the trees have not been pruned. The commissioner is now holding a meeting for the dangerous trees and landslide sites in Mumbai. It is being said that training will be given to the Garden Department for pruning trees. What was the foster minister doing for so long? With the monsoon approaching, now we have woken up from a deep sleep. Due to this negligence, Mumbaikars are facing the danger of drowning.

Tenants are being pitted against each other in rent bidding wars, Dale hears IG News

Presidential Poll And Vice President Election Just A Formality According To The Numbers Victory Of The Bjp Led Nda Candidate Is Certain – Presidential...