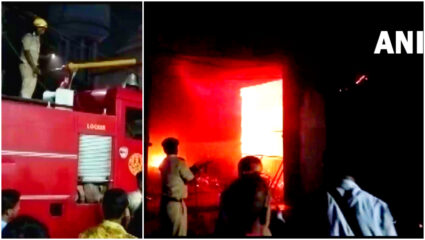 A state in Eastern India : A fire broke out in a 3-storey hotel located under the Brahmapura police station area in Muzaffarpur, Bihar. The fire was so terrible that on seeing it, it badly engulfed the building. After the fire, all the people staying in the hotel were evacuated and several fire tenders reached the spot so that the fire could be brought under control.

Muzaffarpur, Bihar | Fire broke out in a hotel located in Brahampura thana area of ​​the district

We have rescued 3 people from the fire, the fire has been doused now after several hours. It is suspected that a short circuit triggered the fire: Fire personnel, Krishna Yadav pic.twitter.com/8k3Lsfm77U

However, fire brigade Krishna Yadav said that the fire has been brought under control after several hours. Rescued 3 people from fire. It is not yet clear what caused the fire, but a short circuit is suspected to be the reason behind the fire. Please note that the shop was closed when the accident happened. However, by the time the incident was reported, the fire had spread badly.