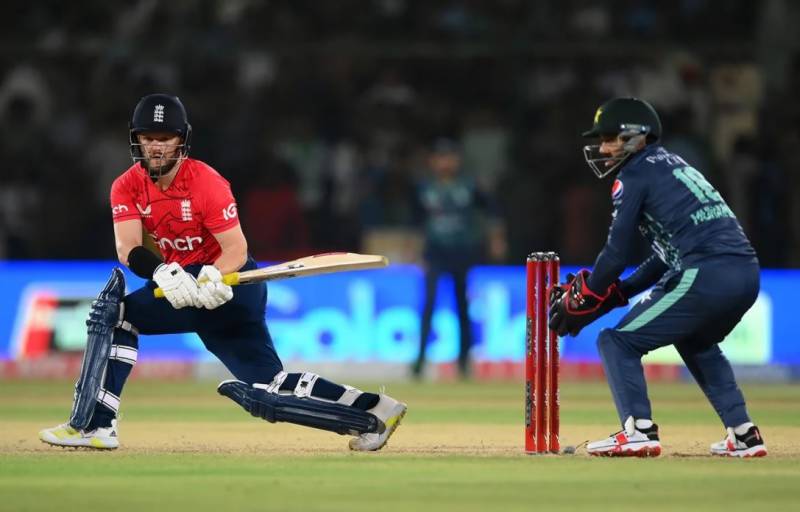 Karachi: In the second match of the seven-match series, England have given Pakistan a target of 200 runs to win due to Pakistan’s poor bowling and poor fielding.

England captain Moeen Ali won the toss of the second match of the series being played at the National Cricket Stadium and decided to bat first. England’s Alex Hales and Phil Salt provided a 42-run start in the first 5 overs.

Shahnawaz Dhani came to bowl the sixth over and on the very first ball he bowled Hales, who scored a half-century in the previous match. Alex Hales scored 26 runs off 21 balls with the help of 3 fours and a six. Shahnawaz Dhani did not even allow the new batsman David Malan to open the account and also blew his wickets on the second ball of the sixth over.

Phil Salt and Ben Duquette put on a third wicket partnership of 53 off 37 balls to take the team’s score to 95 in the 12th over. Haris Rauf picked up his maiden wicket and third win for Pakistan with a 27-ball 30 with a four and a six.

England’s score reached 103 runs in 13 overs, then Mohammad Nawaz aggressively blew the wickets of Ben Duquette, who made 43 runs off 22 balls. Moeen Ali and Harry Brooks scored 59 runs off 27 balls with pace and left the Pakistani bowlers helpless.

In the 17th over of the innings, Haris Rauf bowled Brooks who scored 31 runs with the help of a four and three sixes off 19 balls. The Pakistani bowlers bowled the first five batsmen while Khushal Shah dropped an easy catch of Moin Ali on the fourth ball of the 18th over.

Curran came on to support Moeen Ali for the sixth wicket and scored 10 runs without getting out, making the partnership 39 runs. Moeen Ali scored 55 runs off 23 balls with the help of 4 fours and 4 sixes during this partnership and created a big score. England scored 199 runs in the allotted 20 overs and gave Pakistan a target of 200 runs to win. Very difficult for Pakistani batsmen.

Another name joined the race for the post of Congress President, Digvijay Singh will also contest the election IG News

There is no mistake in Raja’s speech: Ma.Com., Certificate| Dinamalar IG News

The rupee reached the lowest level ever, fell by Rs 81.93 against the US dollar IG News