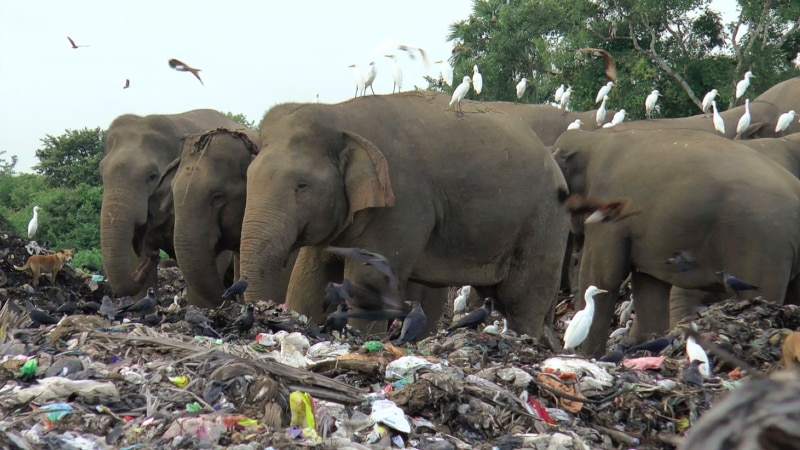 You may have heard the saying, “Everybody’s foot in an elephant’s foot.” And if it is explained, it is comforting to know that if someone is powerful, then responsibility can be placed on him. But if the elephant itself is in danger, it becomes difficult to recover.

Something similar is happening with elephants in Sri Lanka. Environmental and livestock experts warn that plastic found in a large garbage disposal facility in Sri Lanka is causing elephant deaths, and two more elephants were found dead in the weekend.

In Palakado, a village in Ampara district, 210 km east of the Sri Lankan capital Colombo, about 20 elephants have died in the last eight years from eating plastic contained in garbage.

According to the Associated Press, Nihal Pushpa Kumara is a wildlife specialist. He says an examination of the dead elephants revealed that they had swallowed a large quantity of indestructible plastic from the pile of rubbish.

He says, “In the autopsy we found polythene, wrapping paper, plastic and other items that could not be digested in his stomach. We did not find anything that was elephant food or Could be digested. “

Elephant sacred but in danger

Elephants are considered sacred in Sri Lanka. But now his life is in danger. According to the first survey on the number of elephants in the country, their number was 14,000 in the 19th century, but in 2011 the number dropped to 6,000.

On the other hand, with the continuous increase in human population, forests have been reduced and elephants, like other animals, have been affected. When the natural plants needed for food became scarce, they turned to human settlements in search of fodder. But getting closer to these settlements increased the dangers for them. Food was found in the garbage filled with plastic and the risk of death from those who steal ivory, then the farmers became angry that the elephants are destroying their crops.

“In such a case, the elephant is unable to eat anything and becomes so weak that it cannot even stand up and then it dies,” he says.

Plans made but not implemented

In 2017, the Sri Lankan government announced that waste would be recycled in areas where wildlife exists so that elephants could not eat plastic. At the same time, there was a plan to install electric wires around these places to keep the animals away. But none of these plans were implemented.

In areas of Sri Lanka where wildlife exists, there are 54 extensive garbage disposal sites. And officials say some 300 elephants roam around.

According to the Associated Press, the extensive garbage disposal facility mentioned in the village of Palacado was built in 2008 with the help of the European Union. Garbage from nine nearby villages is brought here and dumped, but nothing is being recycled.

The electric wire fence that was erected around it in 2014 was damaged by a lightning strike but was not repaired, so the elephants found their way in and the rubbish was their death knell. Became goods.

Residents in the area say the elephants have moved too close to the population and are so close to the garbage dump that citizens are scared.

When elephants get too close, many people drop firecrackers to scare them away. Some have erected electric fences around their homes.

“Because they don’t know much about the fence, it can be a threat to them and to the elephants,” said Kirthi Rana Singh, a local councilor from Magargaon.

“We chase away the elephants. But they are also very useful to us. They also help in farming. The authorities should devise a way to save the lives of both elephants and humans,” he said.

(The information in this article is taken from the AP)

Threat of Russian attack on Ukraine, US assures full support and...

Pakistani rice sold in international market labeled ‘made in India’

Sadiq and Amin turned out to be the most corrupt, Shahid...

Al-Arro to the Committee of “South Saad Al-Abdullah”: the distributions...

The world’s largest, most powerful and valuable telescope has reached...

Heartbroken family of Scots mum who died in Spain desperate...

The internet gave David Cameron a roasting for his new...

Preparations for the Long March, PDM meeting will be held...

The killer of the martyrs .. the military condemn themselves!...

Rich grandpa lives in the middle of the forest, here...