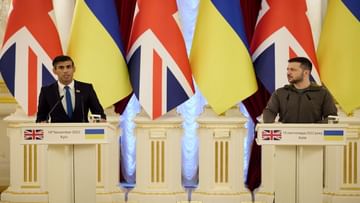 UK to send thousands of winter kits to Ukrainian troops. In particular, the UK has been providing military and humanitarian aid following Russia’s invasion of Ukraine.

Rishi Sunak said Britain would continue to support the Ukrainians in their fight. They laid flowers at the memorial built for those killed in the war. “I am proud that the UK has stood by Ukraine from the beginning and I am here today to say that the UK and our allies will stand by Ukraine,” Rishi Sunak said during a visit to Kyiv. End this barbaric war and give only peace.

He continued, “While Ukraine’s armed forces were able to push back Russian forces on the ground, civilians are now being mercilessly bombarded from the air. We are delivering new air defenses today, including anti-aircraft guns, radar and anti-drone equipment. He also promised to increase humanitarian assistance for the coming harsh winter. During the visit, Sunak also announced £12 million for the World Food Program’s response to Ukraine and £4 million for the International Organization for Migration.

The UK stands firm with Ukraine as it fights to end this barbarous war.

That is why we are committing an extra £50m in funding to strengthen Ukrainian air defences.

The UK PM’s office said in a statement that the funds would help Ukraine with generators, mobile health clinics and shelters. In addition, Britain will send thousands of cold winter kits for Ukrainian troops. The UK has been providing military and humanitarian aid to Kiev, particularly since Russia’s invasion of Ukraine. Britain has imposed sanctions on Moscow since Russia invaded Ukraine on February 24.

Gujarat Election 2022 : Big Debate On Bus: Young and educated candidates were discussed in each party in the election choro program in Vadodara. ...

Gujarat Election 2022 : Big Debate On Bus: Young and educated candidates were discussed in each party in the election choro program in Vadodara. ...

Viral Video: The village chief who cut a cake with a pistol and went to jail – is this all necessary? IG News