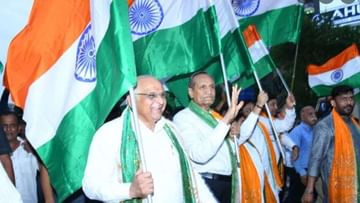 The Chief Minister joined the Tricolor Yatra of Ahmedabad, Vadodara and Surat

Tricolor Yatra was organized under the leadership of CM Bhupendra Patel after the launch of 187 crore development works of the Municipal Corporation in Ahmedabad. The Chief Minister started this Tricolor Yatra, in which thousands of people joined. As soon as the Lokarpan and Khatmuhurta programs were completed in Bapunagar area, a Tricolor Yatra was held on foot in the presence of the Chief Minister. In which the entire Bapunagar residents were immersed in patriotism. A large number of people participated in this yatra with tricolor in hand. During this Tricolor Yatra, which started in the midst of a huge crowd, only the national flag was being seen on all the routes. There were scenes where the entire Bapunagar area was painted in the color of the national flag.

On the occasion of the launch of this Tricolor Yatra, the Chief Minister also said that for years after independence, the celebration of national festivals like Azadi Day was only a government event. But under the leadership of Prime Minister Narendra Modi, today such a celebration is celebrated with great enthusiasm as a national festival.

In this Tiranga Yatra, Home Minister Harsh Sanghvi, Revenue Minister Rajendrabhai Trivedi, Minister of State for Women and Child Welfare Manisha Vakil started from the polo ground here and they also participated in this padayatra.