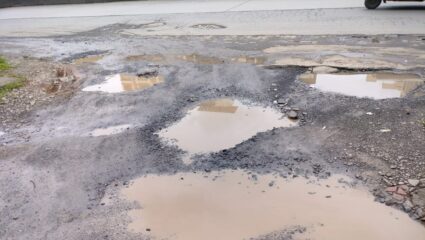 Thane : Traveling by Thane’s Ghodbunder Road is a big dream for Thanekars since monsoons. Two hours of traffic jam is being faced due to bad roads. The road from Kapurbawadi to Fountain Hotel is the most damaged. Some of this entire route comes under the jurisdiction of Thane and Mira-Bhayander Municipal Corporation, some Public Works, some Metro Projects, Maharashtra State Road Development Corporation and some Mumbai Municipal Area Development Authority. Due to lack of coordination, the road is being repaired only temporarily. There are more than two hundred potholes on this road and every day the work of filling the potholes is being done. But it is coming to the fore that there is no help in reducing the traffic jam.

Let us tell you that the problems caused by potholes on the roads in Thane are not decreasing. Due to potholes on Ghodbunder Road, people are facing daily traffic jams for almost three months. The negligence of PWD (Public Works Department) has come to the fore behind this. It has also been revealed that no amount has been allocated for the repair of the road. In the name of repair, only ointment is being done by the Public Works Department. This has been accepted by the local authorities. About 50 pits are filled every day and the same number of pits are made again. At present there are more than 200 potholes on Ghodbunder Road. Ghodbunder Marg was earlier under MSRDC and all the responsibility of the road was with him. In March 2021, the road from Kapurbawadi to Fountain Hotel was transferred by MSRDC to PWD (Public Works Department). The service road near the Fountain Hotel was also handed over to the Public Works Department of Mira Bhayander Municipal Corporation on October 2021.

No provision of expenditure for repair of road

Despite the majority of the Ghodbunder Road coming to the Public Works Department for one and a half years, till date no provision has been made for the repair of the road and no tender has been issued for the same. According to officials, only temporary measures are being taken in the name of repairing the road due to no provision of expenditure, which is not effective. Despite the Thane Municipal Corporation sending a letter to the concerned department regarding filling the pits before the rainy season, no work has been done from the last four to five municipal corporations. On contacting Coordination Engineer Surendra Shewale in this context, he did not pick up the phone. Whereas Municipal Engineer of Thane Municipal Corporation Prashant Sonagra said that a letter has been sent to the concerned department for the repair of these roads on behalf of the Municipal Corporation.

Since there is no coordination in this authority, they are only blaming each other by shirking their responsibilities. Due to this, now common Thanekars are facing the problem of traffic jam every day. Therefore, instead of putting the responsibility on each other, the administration should start the process of filling the potholes of this road as soon as possible. Otherwise there will be vigorous agitation from MNS.