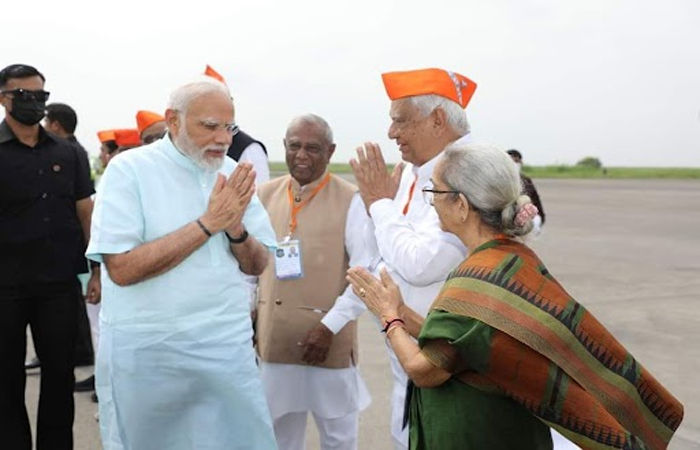 Before the Gujarat assembly election, the launch of 3450 crores of Palika and Khat Murhut was done by Prime Minister Narendra Modi. The rise of AAP in the Surat municipal election and the overreaction and factionalism of BJP leaders left the workers in confusion. But the Prime Minister’s visit yesterday has energized the workers and leaders. The Prime Minister gradually met the senior BJP leaders and the new corporators and leaders of the organization one after the other. The politics of Surat has heated up due to this short visit. In that too, without talking about two assemblies in the speech, the development in his area has left even the political pundits scratching their heads.

During Prime Minister Narendra Modi’s visit to Surat, he met different groups at different times at Surat airport, helipad, the Prime Minister’s remarks to senior, junior and veteran leaders in counting minutes has become a topic of discussion among people. Narottam Patel, who has been pushed behind the scenes in Surat politics for the past few years, met Raman Jani, the former chairman of APMC Market. Many speculations have started about these leaders who have been away from politics for a long time meeting Modi. Along with senior and veteran leaders, Modi also included former Standing Chairman Rajesh Desai, former Chairman and current Chief Minister Mukesh Dalal and former Minister Late. Hemant Chaptwala’s son Keyur Chaptwala called several people by name, besides talking to all 93 city workers of BJP. Due to this visit of the Prime Minister, the meeting of the elected corporators, office bearers of the present organization with the old jogis is proving to be like oxygen. It is being discussed that Modi’s visit before the assembly will prove to be very important for Surat.

Some BJP leaders are overreacting after AAP won 27 seats in the Surat municipal elections. Apart from this, for the last few times, the disunity in Surat city and district BJP is also getting worse. Due to this grouping, the BJP may suffer in the upcoming assembly elections. Apart from this, there is a huge competition going on in the BJP for tickets as well, in such a situation today’s visit of Prime Minister Narendra Modi to Surat is proving to be very indicative.

When the Prime Minister got off the plane at Surat Airport, he was accompanied by the Chief Minister and the State President. After that, before going to the airport in a helicopter, he called some officials of the district and met them. Similarly, 93 BJP Nagar Sevaks and BJP office bearers were called and made a brief visit to the helipad constructed in Limbayat School. Former corporator of Surat Rajesh Desai and BJP General Minister Mukesh Dalal had a short talk with some office bearers-corporators. In the same way, he also spoke briefly to some office bearers of the district. Due to such talk with many people, new vigor has come among BJP leaders. Apart from this visit of the Prime Minister ahead of the assembly elections, the flying meeting with city district officials and corporators of the municipality is being discussed as very important and will prove to be a confidence booster in the BJP.

Apart from this, some parts of Prime Minister Narendra Modi’s speech have made people think. People are debating that Modi spoke about the development of that area without mentioning West and Allpad Assembly and it is very indicative.

The Prime Minister had a public meeting at Limbayat Nilgiris but he did not speak a word for the Limbayat Assembly. But he praised the western assembly seat which is considered the safest in Gujarat for the BJP. Narendra Modi said, areas like Pal, Adajan, Jahangirpura, Palanpore in Surat are developing rapidly and are still developing. Similarly, he said that development has picked up speed in Allpad and Sayan and surrounding areas of Allpad Assembly.

Western Assembly MLA Purnesh Modi is currently a cabinet minister in the state government and is considered to be from CR Patil’s opposition faction. Some time ago the department of his ministry was also changed. But today, instead of praising his performance, many speculations have intensified.