QAnon believers gather to wait for JFK Jr, who they think is still alive – and about to become vice president

QAnon believers gather to wait for JFK Jr, who they think is still alive – and about to become vice president 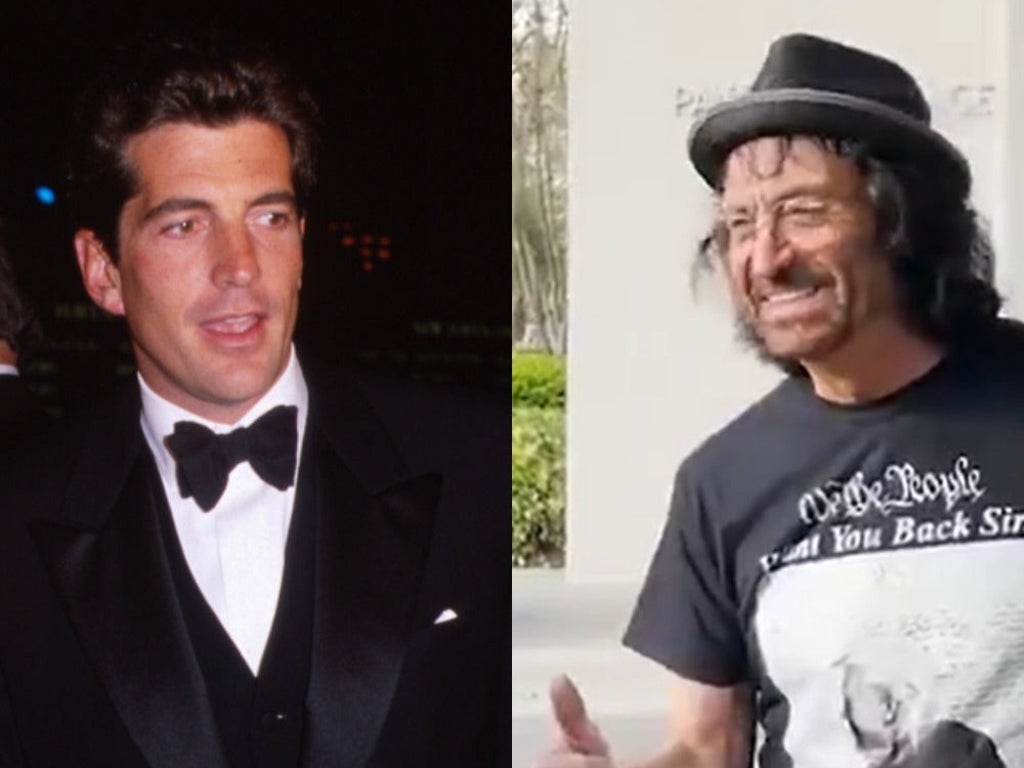 Conspiracy theorist group QAnon hit a bizarre milestone in November last year, when its supporters gathered for what they believed would be the return of the late JFK Jr – who, they believed, would be running on an imagined 2024 ticket with former President Donald Trump.

John Fitzgerald Kennedy Junior’s plane was pulled out of the Atlantic Ocean more than 22 years ago in a crash that killed him, his wife Carolyn and his sister-in-law, Lauren Bessette.

For some QAnon true believers, however, the son of the 35th president of the United States not only survived the tragedy but is poised to make a dramatic return to public life.

A bizarre theory has emerged suggesting that the accident was just a ruse to fake his death and that he will re-emerge to join a reinstated President Donald Trump as his VP.

And those devotees gathered in November for what they expected would be a dramatic revelation at the AT&T Discovery Plaza in Dallas – but was in fact more of a damp squib. When JFK junior unsurprisingly failed to make an appearance, people in the crowd suggested he would in fact make an appearance at a Rolling Stones concert later that day.

Of course, he also failed to attend that event.

Last weekend, when Donald Trump appeared at his first rally of 2022 in Arizona, some QAnon adherents suggested it wasn’t really him but perhaps a double – and perhaps even JFK Jr himself disguised as the former president.

With continued speculation that the deceased Kennedy is still alive, a viral video that emerged last year has even shown a middle-aged man that some QAnon devotees claim is JFK Jr himself.

The theory is strange even by the standards of QAnon – which claims Democrats and Hollywood celebrities are involved in a secret cannibalistic cult which Donald Trump is secretly battling, a theory expounded in cryptic internet messages by a mysterious prophet-like figure known as Q. And while only a fraction appear to believe the JFK Jr angle, experts say it is still damaging to their relationships and their grasp on reality.

Will Sommer, author of the upcoming book Trust the Plan: The Rise of QAnon and the Conspiracy That Reshaped America and a longtime observer of the conspiracy theory, estimates that about 20 per cent of Q followers believe in JFK Jr’s re-emergence, but that those who do, “100 per cent believe”.

“QAnon itself is obviously pretty dangerous. It’s hard to say whether the people who believe the JFK Jr [conspiracy] are more dangerous than the QAnon people who don’t,” he told The Independent.

“Part of the problem, just like with any QAnon belief, is that it’s so bizarre that it alienates people from their friends and family.”

But how did “John John” – poignantly pictured saluting his assassinated father’s coffin at the age of three – come to be drawn into such an outlandish fantasy?

The story goes that after faking his death, Kennedy returned two decades later to help Mr Trump drain the swamp. First he supposedly appeared as Q himself (or close to Q) with the “Q drops” of cryptic information. Then, he was to have revealed himself in 2019, to replace Mike Pence on the president’s 2020 re-election ticket, or maybe the 2021 “reinstatement” (supposedly scheduled for 13 August – although there is no mechanism for reinstating a former president), or maybe the 2024 campaign.

The timeline has kept shifting with each passing milestone.

In the meantime, the lore goes, Kennedy has been in hiding, disguised as a middle-aged, fedora-wearing financial services manager from Pittsburgh named Vincent Fusca.

JFK Jr began trending on Twitter after the comedy duo The Good Liars spotted Mr Fusca at the CPAC conservative conference in July in a video that went viral with 14,000 likes and 2,000 retweets.

“Are you JFK Jr? Yes or No? How did you survive the plane crash? Or was it faked? Wink twice if you’re JFK Jr,” the pair asked him.

Their target, apparently no longer 6ft 1in tall, and wearing a pro-Trump shirt saying “ We want you back, Sir, we miss you Mr President”, responded: “I don’t know who you are man – oh, he’s filming, we got to get going.”

Mr Fusca did not immediately respond to The Independent’s request for an interview. But it’s unclear which is the real Vincent Fusca as several Twitter accounts invoke the name of the man some believe to be a reincarnated JFK Jr.

One Twitter account @vincent_fusca with 134,000 followers, tweeted in the early hours of 7 January – the day after a pro-Trump mob stormed the Capitol to try to prevent Joe Biden’s victory being certified – a mysterious poem featuring lines like “ Surrounded by Truth you see them attack / Do they Eternally want freedom intact? … Soon you’ll be shown the republic where we emancipate at.”

Another account, @Vincent__Fusca, describes himself as a loving husband, father, patriot and Trump supporter with an undying love for the US.

Yet another is called “VINCENT FUSCA HAS OFFICIALLY RETURNED“. He hasn’t fully tweeted since Joe Biden won the election in November, but preaches his own resurrection: “My return was slated for 7/4/20- The date has moved up; VINCE FUSCA IS BACK- JFK JR IS RISEN!”

The theory appears to have emerged from an April 2018 Q drop resurfacing a pre-Q era theory in which JFK Jr’s 1999 plane crash was orchestrated by the Clintons, supposedly to prevent him running for the New York Senate seat later won by Hillary Clinton.

Fact-checkers from Snopes had tackled this older strain of the conspiracy when it spread during the 2016 election, pointing to a New York Daily News article in an effort to debunk it.

Daily News journalist Joel Siegel wrote four days after Kennedy’s death that two friends confirmed the “best-kept” secrets in politics, that he had been seeking the seat.

“The idea became moot once First Lady Hillary Rodham Clinton signalled her interest in running, but the two friends said they expected the son of the slain President eventually would have jumped into politics as a candidate,” the story said.

“The second friend called Kennedy’s interest ‘pretty serious,’ adding: ‘I think he was intrigued by the idea … Would he have decided in the end to go for it? I don’t know. But he was clearly thinking about it. He talked to a few people about it. Then the Hillary thing ended it pretty quickly.”

Writing for The Daily Beast, Mr Sommer has been following the evolution of that shifting pre-Q conspiracy, into a Q-conspiracy, since it emerged on 4- and 8Chan messaging boards around October 2017.

The summer of that year, a new poster going simply by “R”, later dubbed Ranon, connected the existing conspiracy that Kennedy faked his death by saying he did it to become Q so that he could help his friend, Donald Trump, become president.

Mr Sommer says that for many QAnon believers, this theory is a step too far.

“There is this funny dynamic in QAnon both with JFK Jr and other stuff where they say, ‘Oh I believe that world elites drink children’s blood and all this kind of stuff, but ‘WOAH JFK Jr, that’s the crazy one’.

“I think it’s just so farcical on its face that they’re kind of embarrassed by it, if someone comes out and says I think world elites sometimes abuse their power to abuse children – that doesn’t sound that crazy. If someone were to come out and say, ‘I think JFK Jr was still alive’ – so yeah they find it embarrassing.”

“Right after I shared this on Twitter there was a hit piece written about me and I’m thinking, that’s really crazy, that is so bizarre, I just tweeted a theory that wasn’t even my own, and said this is interesting and next thing there’s a hit piece about me, calling me names … so that made me think, there’s something to this,” she said in a YouTube interview.

“The way that Q talks about JFK Sr in the posts, it is with such love and passion, it makes me think that it is someone that is close to him. To me, if If JFK Jr faked his death and was alive, it would make sense that he was Q.”

More evidence came in the form of an (unverified) quote from Kennedy published in his George magazine just one month before his death.

He said: “If my dear friend Donald Trump ever decided to sacrifice his fabulous billionaire lifestyle to become president he would be an unstoppable force for ultimate justice that Democrats and Republicans alike would celebrate”.

The two were friends, and the photo of them together used in the post was real, from a New York Knicks game in March 1999, three months before the June 1999 issue the quote claimed to be from. The closest quote fact-checkers from the Poynter Institute’s PolitiFact found was from a story in The New York Post in November 2016 from Michael Berman, co-founder of George magazine, when Mr Trump and Kennedy schmoozed at Mar-a-Lago.

“As frequently happened to Kennedy at his events, talk soon turned to whether he could envision himself running for president. Trying to deflect the presidential chatter, Kennedy noted that the Trump estate was far more glamorous than a Kennedy family compound a few miles away. ‘I think you should be asking those questions of Donald,’ Kennedy said, according to Berman. ‘He’d clearly have the most extravagant winter White House.’”

Kennedy crashed the Piper Saratoga plane he was flying – with his wife and sister-in-law as passengers – into the Atlantic near Martha’s Vineyard on 16 July, 1999. Their bodies were found five days later. The latest tragedy to befall a family apparently haunted by misfortune made headlines around the world.

For his supposed return at a 4th of July rally in 2019, some supporters carried JFK Jr facemasks.

Others carried Trump JFK Jr 2020 flags or wore his likeness on their shirts, shouting “He’s alive”. Mr Sommer says supporters cheer and interact with Mr Fusca when they see him and ask him if he is really JFK Jr.

“His whole deal is that he’s very cryptic about it. He obviously knows what’s going on but he doesn’t comment on it,” Mr Sommer says.

“He talks about Q and stuff like that. But when I’m like, I want to talk about how people think you’re JFK Jr, he doesn’t do that.”

Spotting Mr Fusca in the background of MAGA rallies and GOP events has become a popular sport for some QAnon followers.

He was seen at Mr Trump’s Ohio rally on 26 June last year, according to Patriot Takes, and before that was seen at CPAC in July. He was also seen at CPAC two years ago in this Reddit post, “JFK Jr spotted at CPAC…. Hillary’s arrest must be imminent”.

At last February’s CPAC, he could be seen behind former housing secretary Ben Carson, giving a double-thumbs up, as if to say, “trust the plan”.

Why did Larne midfielder John Heron have to gnash his teeth...

Head to head records and other key statistics IG News

Ban situation will be more complicated in the state! This...

Fact Check A Viral Photo With The Title Of The...

Meera Jasmine: The senior beauty who does not take anything...

Dead body found on the roadside, postmortem will be done...

Stronger, better prepared Tiger Woods says he can win the...

PDM needs time and support to neutralize Imran’s threat of...

Rangers fans in Seville travel in chaos as two chartered...