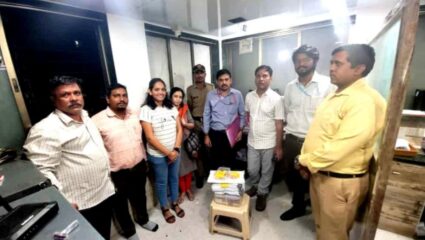 Pune : Officials of Bureau of Indian Standards launched a special enforcement (search and seizure) drive in major cities of Maharashtra State to check misuse of BIS Hallmark on gold ornaments . Simultaneous raids were conducted at 6 locations in Maharashtra including major hubs like Mumbai, Thane, Pune and Nagpur. Two establishments engaged in fake hallmarking of gold jewelery in Mumbai’s Zaveri Bazaar were raided as part of a crackdown in which around 2.75 kg of gold jewelery estimated to be worth over Rs 1.5 crore was seized.

Similar crackdown in Thane, Pune and Nagpur also led to seizure of fake marked jewelery and action was initiated against firms duping customers by affixing fake hallmarks on gold jewelery without adequate testing and quality checks as specified by BIS.

Can be hallmarked only by BIS Recognized Hallmarking Center

According to the Hallmarking of Gold Jewelery and Gold Artifacts Order, 2020, issued by the Department of Consumer Affairs, Ministry of Consumer Affairs, Food and Public Distribution, Government of India, gold jewelery and gold artefacts to bear BIS Hallmark compulsorily from 16 June 2021 Should be The BIS Hallmark currently consists of 3 parts of the BIS logo, purity and fineness in carats and a 6 digit alphanumeric “Hallmarking Unique Identity (HUID)” number which is unique to each article. Jewelery can be sold only by jewelers registered with BIS and can be hallmarked only by BIS accredited Assaying and Hallmarking Centers (AHCs).