Reservation | First the fight to get the reservation then canceled, people upset due to the cancellation of trains IG News 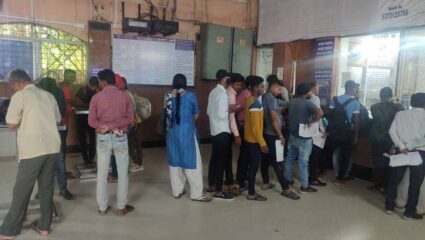 Nagpur. Railways has canceled about 50 trains before the festivals, due to which the passengers are upset. Passenger organizations are also angry with this arbitrariness of the railway administration. Due to the cancellation of trains, passengers are thronging the counters of the station to get refund. Surprisingly, all the counters at the station are not being opened. There are 4 counters at the East Gate, out of which only 1 counter is being opened. Similarly, only 3 counters are being opened at the western gate, while 7 counters remain. There is a long queue of people at the East Gate counter. People say that earlier they had to struggle to get reservation, now there is a fight to get it canceled.

Satish Yadav, ZRUCC member in Central Railway, says that what is the compulsion that trains have to be canceled only during festivals. It could be planned before or after the festivals. During the Corona period, the operation of trains came to a complete standstill. After this, trains are being canceled in the name of track maintenance. After 2 years all the festivals are being celebrated with pomp. Durga Puja has special significance in West Bengal.

Bengali families go to their homes from every corner of the country, for which people make reservations for several months in advance. Due to the cancellation of trains on the last occasion, the whole plan of the people got ruined. Similar problem happened during Rakshabandhan. Basant Kumar Shukla, Secretary, Bhartiya Yatri Kendra, has written a letter to the officials of Central Railway and South-East-Central Railway asking what alternative arrangements have been made for the passengers after the cancellation of trains, so that they can reach Howrah.

He said that the railways is doing the work of reducing the joy of festivals. People eagerly wait for festivals like Durga Puja and Diwali throughout the year. During this, the whole family shares their happiness together, but the railway administration is working to snatch the happiness of the people by canceling the trains. He has demanded the railway officials to open the closed ticket counters, so that the problems of the people can be reduced.