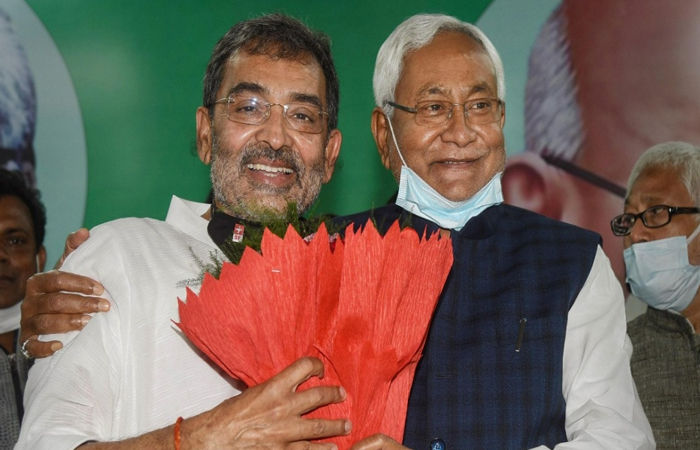 According to Kushwaha, people want Nitish Kumar to serve the people of Bihar besides staying at the highest peak of power.

Nitish Kumar is still repeatedly denying his candidacy for the post of Prime Minister after the political game seen in Bihar some time ago. Also, he seems to be advocating to promote youngsters like Tejashwi Yadav. Amidst all this, Rashtriya Janata Dal leader Shivanand Tiwari said that Nitish Kumar should open the Ashram himself by making Deputy Chief Minister Tejashwi Yadav the Chief Minister in 2025.

In this matter, JDU leader Upendra Kushwaha countered and said that people want to see Nitish Kumar at the top of power and he is not opening any ashram. Along with this, he also advised Tiwari to find an ashram if needed.

In ordinary public life, opening an ashram is associated with taking sanyas, and such a statement in the Nitish Kumar case could prove politically damaging to Shivanand Tiwari.

Shivanand Tiwari made such a statement for Nitish Kumar in the presence of party president Lalu Yadav at the state convention of RJD. However, it is clear that neither Lalu nor Tejashwi Yadav will support Tiwari’s statement as Nitish Kumar is very active in uniting the opposition for the 2024 Lok Sabha elections and is meeting opposition leaders across the country. Speculations are rife that Nitish Kumar will contest the Lok Sabha elections from Phulpur or Mirzapur in UP.

JDU Parliamentary Board Chairman Upendra Kushwaha reacted to Shivanand Tiwari’s statement and said, ‘Baba, Nitish Kumarji is not going to open an ashram now. The prayers of crores of countrymen are with him and they want Nitishji to stay at the highest pinnacle of power and serve the countrymen besides the people of Bihar. I think, if you need, find another ashram.’