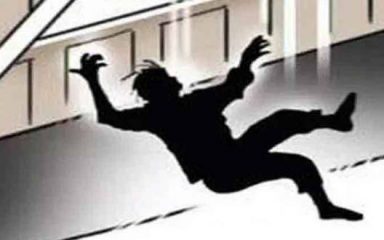 Nagpur. A student of SFS College in Seminary Hills committed suicide by jumping from the fourth floor of the college building. The deceased was told as Shivam Katare. He was a BCA second year student and had appeared for the exam before the incident. He was seen in a lot of depression after the exam at 12 noon on Friday. During this he jumped from the fourth floor of the college and was seriously injured. The students standing nearby say that even after 15 minutes of the fall, he was not taken to the hospital.

It is alleged that none of the teaching staff present there showed the need to take him to the hospital in their car. Somehow he was taken to a private hospital on Mankapur Road but by then he had died. Had he been brought to the hospital immediately, perhaps Shivam’s life could have been saved. After the incident, a large number of his friends and other college students gathered in the hospital. The police have questioned his friends.

However, the matter became suspicious due to some reasons. According to sources, Shivam drank around 200 ml of petrol before jumping off the building. Shivam’s father works as an electric fitting. Before jumping, he said the last words to his father that Papa, forgive me. You did a lot for me but now I don’t want to live. After this he jumped from the fourth floor. On the other hand, Shivam’s friends also raised questions on the functioning of the hospital and created a ruckus. He said that Shivam belongs to an ordinary family.

He was already dead by the time he was brought to the hospital. Despite this, the hospital made a bill of Rs 1.50 lakh after 3 hours. Somehow Rs 40,000 was paid but it is alleged that the hospital was adamant on taking the remaining Rs 1.10 lakh. During this some political people also reached the hospital.

On the other hand, as the matter was suspicious, the Gittikhadan police took some of Shivam’s friends with them to the police station to get more information about the case. Police registered a case of accidental death. The investigation continues. Police are also probing why Shivam drank petrol before jumping off the building.