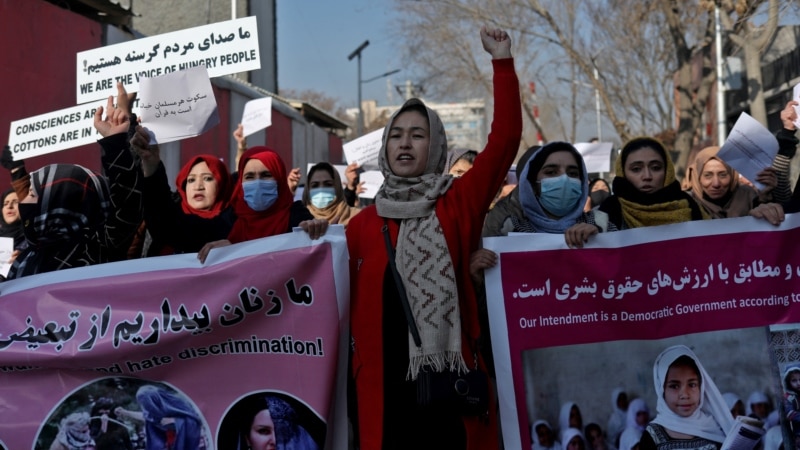 On Tuesday, Taliban security forces in Afghanistan fired warning shots to disperse women protesting in Kabul against the country’s restrictions on women.

Protesters marched on the streets of the capital, Kabul, towards the ministry building, “Command the good and forbid the evil.” The ministry is responsible for enforcing Islamic law, according to the Taliban. Protesting women held banners reading “We are fed up with discrimination” and “We are the voice of hungry people.”

Other banners read, “We women are awake and hate discrimination.” There was also a banner saying, “Why are schools closed?”

The protesting women were demanding jobs, food and education.

Huda Khamosh, one of them, told VOA that the Taliban fired warning shots to stop the protesters as they tried to enter the former Ministry of Women’s Affairs building.

Khamosh said that some people involved in the protest were also injured. However, VOA could not confirm this claim from independent sources.

Scenes of the demonstration were shown on Afghan television channels.

As many as 30 women gathered near a mosque in central Kabul on Tuesday and began marching, AFP news agency reported. They were chanting “Justice, justice”. He was later stopped by Taliban forces.

Two days before the demonstration, the Taliban announced new travel restrictions on women across Afghanistan, which was seen as tantamount to further restrictions on their rights.

Under the new rules, women will not be able to travel more than 72 kilometers unless they are accompanied by a close relative.

Under the rules, taxi drivers are also instructed to provide rides only to women who wear headscarves or hijabs and avoid listening to music while traveling.

Since the Taliban took over Afghanistan, boys have been allowed to attend school in the country, and girls’ schools have opened in some provinces. However, in many places girls are still waiting to go to school and the majority of women are not allowed to return to work.

Last month, the Taliban’s ministry instructed TV channels in Afghanistan to stop showing dramas and other programs featuring female artists, as well as for female news anchors to wear the hijab during broadcasts.

When the ultra-conservative group announced its first interim cabinet after the Taliban took over Afghanistan in August 2021, it did not include any women.

The United States and the international community have not recognized the Taliban government. And because of the Taliban’s tough measures from 1996 to 2001, he warned that the decision to recognize the Taliban government would be based on their behavior, whether the group upheld human rights, especially women’s rights. ۔ And to establish a government in Afghanistan that represents all classes and declares separation from terrorist groups.

Sudan reaps the fruits of changing the rules of the...

Get married soon, 11 portraits of Michelle Wanda ‘Break Up...

Guess the name of Korean variety shows through this quiz,...

Pakistan issued sukuk bonds after four years but how much...

Two arrested after murder of young lesbian couple in Mexico