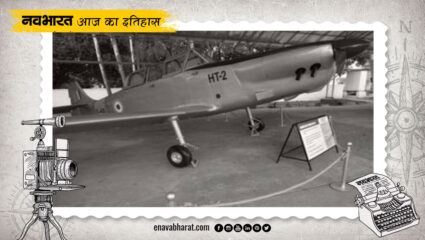 New Delhi: Today in the pages of history proved to be a milestone for the aviation industry of the country. On this day in 1951, Hindustan Trainer 2, the first aircraft made in India, made its first flight. Production of this two-seat aircraft for the Indian Air Force and Navy began in 1953. It was not long before the country got independence, in such a situation, designing this first aircraft by Hindustan Aeronautics was a big achievement in itself. Apart from military purposes, this aircraft was also used by Indian aviation schools. The serial details of other important events recorded on the date of August 13 in the history of the country are as follows:-

1598: Henry IV, the ruler of France, issued the Edict of Nantes. On the basis of this order, Protestant Christians were given complete religious freedom.

1642: Dutch astronomer Christian Huygens discovers the peak of the South Pole of Mars.

1784: Pitt’s India Bill introduced in the British Parliament for administrative reforms in India.

1814: Agreement between Britain and Holland to end the slave trade.

1891: The three brave guards of Manipur, Senapati Tikendrajit Singh, his brother Agnesh Sena and General Thangal were hanged by the British rulers on their own soil.

1898: American forces led by George Dewey capture Manila, the capital of the Philippines.

1902: England beat Australia by one wicket to register the famous victory at The Oval.

1913: Stainless steel was invented by Harry Brearley of Sheffield, England.

1951: Hindustan Trainer 2, the first aircraft designed and manufactured in India, took off.

1993: Peace agreement between Israel and Palestine in Washington.

1994: Historic agreement on nuclear disarmament in Geneva between the US and North Korea.

2008: Tata Steel, the world’s leading steel company, entered into an agreement with two major companies in Vietnam to jointly build a steel complex.