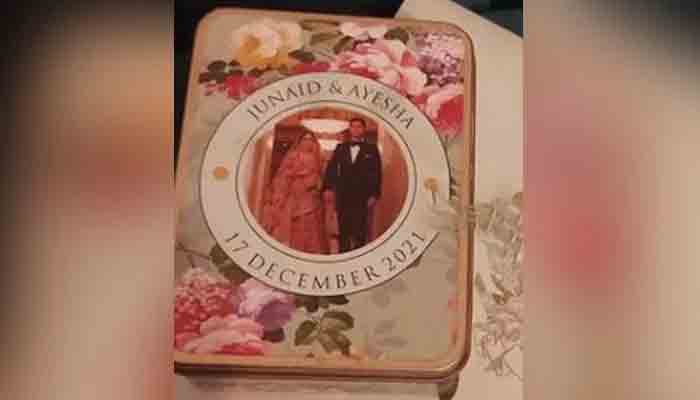 A local publication shared the invitation card on social media claiming it to be of PML-N leader son’s valima.

The viral invitation card has the picture of Junaid Safdar and his wife with a date of the function to be held in Lahore.

It was earlier reported that the son of Maryam Nawaz and Captain Safdar will celebrate his valima in Lahore on December 17.

Speaking during the hearing of Maryam Nawaz’s case in the accountability court of Islamabad on Wednesday, her lawyer — Azam Nazir Tarar — confirmed December 17 as the date of the ceremony. He, therefore, requested the judge to fix the next hearing on some other date.

It may be recalled that Junaid Safdar tied the knot with Ayesha Saif, the daughter of Nawaz Sharif’s long-term ally Saif-ur-Rehman, on August 22 in London after which photos and videos of their nikkah went viral on social media.

On the other hand, Maryam Nawaz and her husband could not be present at the wedding ceremony as her name has been added to the exit control list (ECL), which bars her from leaving the country before the conclusion of the court cases against her.

Those who have shown brutality in Sialkot do not deserve any concession, says Punjab Chief Minister

Facebook
Twitter
Pinterest
WhatsApp
Email
Previous articleInauguration of a memorial center for Fidel Castro in Cuba, on the fifth anniversIG of his death, in the presence of Maduro
Next articleLahore High Court refuses to accept DG LDA’s pardon
- Advertisment -