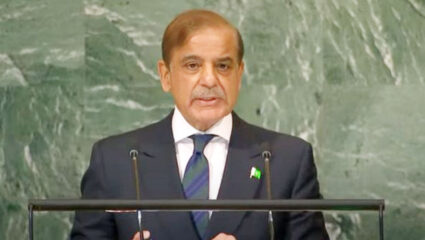 New York. Pakistan Prime Minister Shehbaz Sharif expressed the country’s desire to achieve peace with India at the United Nations General Assembly (UNGA) on Friday. Along with this, he also raised the issue of Kashmir. He said that India has stood by its long standing stand on Kashmir that the entire Union Territory is an integral part of India.

Addressing the 77th United Nations General Assembly (UNGA) session, Shehbaz Sharif said, “India must take credible steps to create a conducive environment for constructive engagement. We are neighbors and are forever, it is our choice whether to live in peace or fight with each other.

India must take credible steps to create enabling environment for constructive engagement. We are neighbors and we are there forever, the choice is ours whether we live in peace or keep on fighting with each other: Pakistan PM Shehbaz Sharif at #UNGA pic.twitter.com/90RcbEqFqr

Sharif said, “Since 1947 we have fought three wars and as a result only misery, poverty and unemployment have increased on both sides. Now it is up to us to resolve our differences, our problems and our issues through peaceful dialogue and discussion.”

The Pakistani PM said, “I think the time has come for India to understand the message that both the countries are connected to each other. War is not an option, only peaceful dialogue can resolve the issues so that the world becomes more peaceful in the times to come.”

#WATCH , Pakistan PM Shehbaz Sharif rakes up Kashmir issue at #UNGA, , “…We look for peace with all our neighbours, incl India. Sustainable peace & stability in South Asia however remains contingent upon a just & lasting solution of Jammu & Kashmir dispute…”

At the same time, on the Kashmir issue, Shahbaz Sharif said, “We want peace with all our neighbors including India. Permanent peace and stability in South Asia, however, depends on an equitable and permanent settlement of the Jammu and Kashmir dispute.

Shahbaz Sharif also elaborated on the situation in Pakistan amid the devastating floods in the country. He said that, “More than 1500 people including more than 400 children have left this world in the floods. Even more are at risk from disease and malnutrition. As we speak, millions of climate migrants are still looking for dry land to set up their tents.