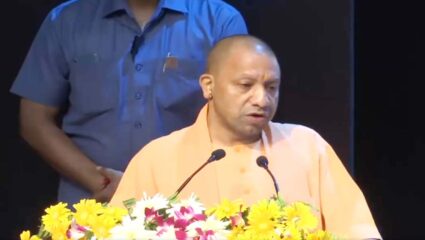 LucknowThe government will launch the Mathrubhumi Yojana Portal on the birth anniversary of Mahatma Gandhi (October 2). This will connect the general public. If a person wants to construct a community building, hospital, school, common service center etc. in the name of his ancestor in the village, then he will have to pay 60 percent. The state government will invest 40 percent of the money. The said building/scheme will be in the name of his ancestor. Chief Minister Yogi Adityanath said these things. He was virtually addressing the opening ceremony of Kisan Mela and Rural Development Exhibition organized by Pt. Deendayal Upadhyaya Smriti Mahotsav Samiti in Mathura. Due to bad weather, the Chief Minister had to attend the program from Lucknow itself.

Chief Minister Yogi Adityanath said that high-speed internet and free WiFi service are going to increase in villages. The service of high speed internet strengthens the economy. We are going to connect every gram panchayat with better connectivity. With this, the villagers will get 243 types of services related to banks, police stations and tehsils in the Panchayat Secretariat of the villages.

India’s economy is rural based

The CM said that this program is going on for 50 years in the Dham of Deendayal Upadhyay, the founder of Antyodaya. Whatever work has been done in this Dham regarding rural development, agriculture and prosperity of the farmers, has become an inspiration for the country. The economy of India is rural based. This is the reason that when the country was fighting for independence, then the Father of the Nation, Mahatma Gandhi had given the mantra of self-reliance through Swadeshi and Gram Swaraj for the independence of India. Gram Swaraj can be envisaged only through rural development. If we want to increase India’s agricultural economy and strengthen India’s economy according to the dreams and resolutions of PM, then along with rural development, we will have to work on agriculture with the same strength. Emphasis was laid on increasing the production capacity by reducing the cost of cultivation in the country within eight and a half years.

CM Yogi counted the names of many schemes

The CM said that many programs have been started in the country to make use of technology and bring happiness in the lives of farmers. Farmers were seen getting the benefit of PM Bima Yojana, PM Krishi Sinchai Yojana, NSP (Minimum Support Price). For the first time the farmer does not need to take loan from moneylender for farming. An arrangement was made to give 6 thousand rupees annually to the farmer from the PM Kisan Samman Nidhi. In UP, 2.60 crore farmers are getting its benefit. Under PM Krishi Irrigation, additional irrigation facility has been made available in more than 21 lakh hectares of land in UP.

CM Yogi said that where there is no canal, farmers have to run water from tube wells. The cost of electricity may have increased, but the cost of tube wells for farmers and electricity for agriculture came down. In the next 5 years, most of the tubewells will be provided irrigation facility or will be successful in providing free irrigation facility by giving solar panels under PM Kusum Yojana. This system was implemented in the country to reduce cost, increase production. One lakh 80 thousand crore rupees have been sent to the accounts of farmers of UP through DBT. There should be talk of payment of sugarcane price, modernization and revival of sugar mills, process of increasing procurement of corn, oilseeds, pulses and coarse cereals by establishing paddy-wheat purchase centers, food processing for vegetables and fruits. Food Processing Center has been set up in Braj Bhoomi near Kosikala in association with PepsiCo. Lakhs of quintals of potatoes are consumed here, due to which the farmers get a good price.

Double engine government working to change the lives of farmers

CM Yogi said that the government of double engine is working for change in the life of Annadata farmer. When Jan Sangh and BJP were away from power, then Pt. Deendayal Upadhyay had given new economics to the country. He had said that the criterion of the economy of any country can not be determined by the economically well-off people, but by the economic condition of the person sitting at the lowest rung. He had a new concept of Antyodaya. The person sitting on the last pedestal had a determination to change his life. There was a resolution to give water to every field, work to every hand.

CM Yogi said that the BJP governments at the Center and the state are realizing the vision of Pt. Deendayal Upadhyay. BJP governments are providing roof to every poor through PM Awas Yojana. It is like Panditji’s dream come true. Toilet is a symbol of women’s dignity along with cleanliness. Providing pure drinking water to every household through Har Ghar Nal Yojana is also an undertaking to enhance the resolutions of Pt Upadhyay. The availability of free cooking gas and electricity connection is also to fulfill the resolve of Pt. Deendayal Upadhyay. Providing water to every farm is also like fulfilling his dream. The Central and State Governments are working towards bringing a change in the lives of the citizens with their resolutions.

There was no electricity before 2017

CM said that exhibition and seminar at Deendayal Dham is the need of the hour. Before 2017, there was no electricity, now street lights are lit in all villages. It draws attention towards New India, New UP. Free gas connections are being provided to the needy by setting up camps. Earlier there was lack of employment for women in rural areas. Today many programs are being organized by women’s groups. Earlier the youth had to wander for employment, now the youth are moving towards economic self-reliance through ODOP and Vishwakarma Shram Samman. All this work is like fulfilling the resolve and dreams of Pt. Deendayal Upadhyay.