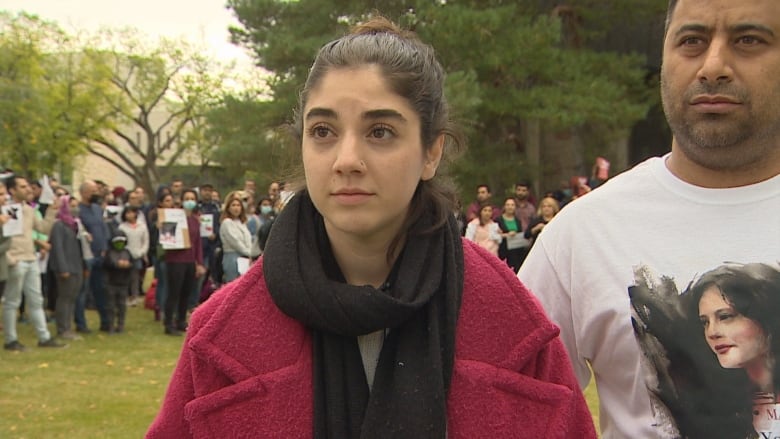 The women stand next to each other, grabbing their hair and then start cutting with scissors.

On Thursday, women in Saskatoon joined Iran and around the world cutting their hair in public to protest the death of 22-year-old Mahsa Amini, whose morals were adequately cut by Iran’s police. He had died in custody after being arrested for covering up.

The women’s action in Saskatoon was part of Amini’s protest and memorial held on the University of Saskatchewan campus.

“People here are looking for justice,” said Tiam Kazemi, who took part in the protests on Thursday.

“They are more than just looking for a change in regime because we had so many young people dying under these investigations by the police, who are supposed to bring security to our country, not death.”

Iran’s ethics police arrested Amini last week for allegedly wearing a hijab inappropriately and showing too much hair. She slipped into a coma and died in custody.

Iranian officials denied any wrongdoing, saying Amini died of a heart attack. However, her family maintains that she was in good health and suffered injuries to her legs during her detention.

Scarves have been made compulsory for women in Iran since the Islamic Revolution of 1979, and members of the ethics police enforce a strict dress code.

“For 43 years the Islamic Republic has been oppressing Iranian women and violating their rights and the world is silent,” human rights activist Azam Jangarvi said in an interview. Saskatoon Morning,

Jangarvi was arrested in 2018 for removing the hijab at a protest in Iran. She was sentenced to three years in prison, but she managed to escape to Canada with her daughter.

“The Iranian people are angry,” she said. “And you can’t imagine that we don’t have any right to choose clothes, from rights to [of] Divorce and even custody of the child. Every Iranian woman wants freedom.”

A Saskatoon man, originally from Iran, is drawing attention amid protests in the Middle-Eastern country. Those protests followed the death of a 22-year-old woman who was in police custody. Guest host Heather Morrison talks with a woman who had to flee Iran, and hears about Mahsa Amini’s memorial in Saskatoon.

In reaction to widespread protests in Iran, the country’s President Ibrahim Raisi said on Thursday that “acts of anarchy” are not acceptable, in a warning to protesters who have taken to the streets to vent their anger over Amini’s death.

Kazemi says he hopes those protesting in Iran will be aware of the support in Saskatoon.

“I don’t know how many times people were protesting [over the] Last few years, but we are hoping this is the last one.”

“We’re hoping it’s the last. We’re hoping this changes everything, and the people will eventually be free … We want to fight in the street with the people, but we’re lucky we don’t It’s mehsa.”

Bijon Arab shares a desire to help, but knows the limitations of doing so while outside Iran.

The president of the Saskatoon Iranian Cultural Association was one of the organizers of Amini’s memorial, which was organized by U.K.S.

Arabs say it is not easy for them to watch videos from their former home country.

“I was sad, plus I was mad … that I’m not there, I can’t help people in Iran,” he said ahead of the demonstration and memorial on Thursday. “But then I realized that the best thing to do is, you know, to show your support from here on out.”

A rally is planned in response to Amini’s death on Friday afternoon at the University of Regina.

At least nine people have died in clashes between security forces and protesters in Iran, according to a tally by the Associated Press.

An anchor on Iran’s state television suggested Thursday that the death toll from the mass protests could be as high as 17, but did not say how he reached that figure.