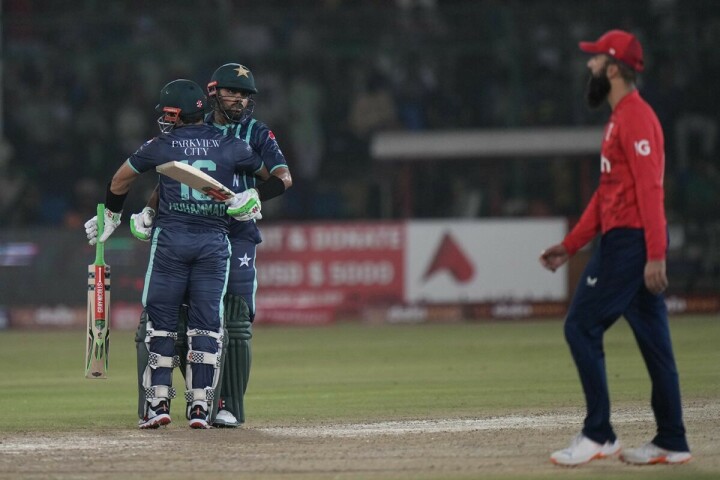 In the second T20 International, Pakistan defeated England by 10 wickets thanks to the brilliant batting of Babar Azam and Mohammad Rizwan. The Green Shirts achieved the target of 200 runs without any loss.

Pakistan openers Babar Azam and Mohammad Rizwan started the innings confidently in pursuit of England’s big target of 200 runs at the National Stadium Karachi, both of them batting very responsibly and completed the target in 19.3 overs without loss.

Babar and Rizwan formed the greatest partnership in T20 international cricket for Pakistan.

The series against England is tied at one, the third match will be played tomorrow (Friday).

Babar Azam scored the second century of his T20 career, he was not out after scoring 110 runs off 66 balls, he hit 5 sixes and 11 fours in the innings, Mohammad Rizwan also scored 4 sixes and 5 fours on 51 balls. Scored an unbeaten 88 runs.

Earlier, Pakistan team has also defeated India by 10 wickets in October 2021 in Dubai.

In the second T20 International of the 7-match series of the best period, English captain Moeen Ali won the toss and decided to bat and scored 199 runs for the loss of 5 wickets in the allotted overs.

English captain Moeen Ali played an unbeaten innings of 55 runs with the help of 4 sixes and as many fours off 23 balls while batting aggressively.

Earlier, talking after the toss, Babar Azam said that Mohammad Hussain has been included in the team instead of Naseem Shah, England will have to be restricted to 160 runs.

Moeen Ali said that there are enough cracks on the wicket, we will feed 3 spinners today.

In the first T20 International, England defeated Pakistan by 6 wickets.

From Timmins, Ont. to Tennessee: Shania Twain reflects on her ascent to fame IG News