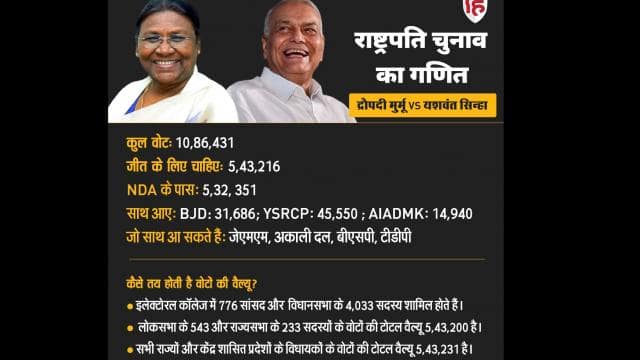 In a statement, the party said Jagan believes that supporting Murmu is in line with his ideology of always emphasizing on representation of SC, ST, BC and minority communities. It said that in the last three years, the Chief Minister has attached great importance to the upliftment of these communities and also ensured that they are well represented in the cabinet.

Murmu will file nomination on Friday

Murmu was made the NDA’s presidential candidate on Tuesday. She will file her nomination papers on Friday. The YSRCP said the chief minister would not be able to attend the filing of nominations by Murmu due to a scheduled cabinet meeting. However, Rajya Sabha MP Vijayasai Reddy and Lok Sabha MP Midhun Reddy will be present. Murmu is originally from the Mayurbhanj district of Odisha and belongs to the tribal community Santal (Santhal). His tenure as the Governor of Jharkhand has also been undeniable, while Yashwant Sinha, the candidate of the United Opposition, also has a close association with Jharkhand.

With the announcement of Draupadi Murmu’s name in the presidential election, the game started, how Yashwant Sinha would fail

Former Jharkhand governor Murmu, 64, will file her nomination on Friday in the presence of other senior leaders including Prime Minister Modi, Defense Minister Rajnath Singh and Union Home Minister Amit Shah. During the nomination, two senior ministers of the state government will be present as representatives of the ruling Biju Janata Dal (BJD) of Odisha. The BJD has supported Murmu’s candidature.

Why NDA will be happy even before elections

The BJP expects the NDA candidate to get the support of some regional parties like the All India Anna Dravida Munnetra Kazhagam (AIADMK) apart from the YSR Congress. After the recent biennial elections to the Rajya Sabha, the total strength of the BJP in the Upper House has gone up to 92, while it has 301 members in the Lok Sabha. The BJP’s resounding victory in the recent assembly elections in four states, including Uttar Pradesh, has also boosted the NDA candidate’s chances of victory. The vote value of the MLAs of Uttar Pradesh is highest as compared to any other state.

However, the number of NDA MLAs in this election is less as compared to the 2017 presidential election. But the number of its MPs has increased. However, the BJP on Tuesday surprised everyone by announcing the name of former Jharkhand Governor Murmu as its presidential candidate. If Murmu wins the election, she will replace Ramnath Kovind.

According to the latest figures, the BJP has a total of 393 members out of a total of 776 members of both the Houses of Parliament. These do not include the four nominated members of the Rajya Sabha because they cannot vote in the presidential election. Apart from the 21 MPs of Janata Dal (United), the BJP candidate reaches a stronger position if the number of MPs from Rashtriya Lok Janshakti Party, Apna Dal and Northeast regional and allies are added.

The value of votes of the members of Rajya Sabha and Lok Sabha is 700. There are total 4033 MLAs in the states. The vote of these MLAs is determined according to the state. The final list of electors will be released after the results of the by-elections to three Lok Sabha seats and 16 Rajya Sabha seats.

Nominated members of Rajya Sabha and Lok Sabha or State Assemblies are not eligible to be included in the electoral college, therefore, they are not entitled to participate in the elections. Similarly, the members of the Legislative Councils are also not voters for the Presidential election.

Tension, internet shutdown after killing of a person in Udaipur IG News

GUlabrao Patil, who will bet ?; ‘These’ three rebel MLAs compete for ministerial posts? – discussions are going on in the district...

A new twist in Maharashtra’s political crisis, Eknath Shinde can...

Tension, internet shutdown after killing of a person in Udaipur ...

These Eastern Ghats Tourist Places Are Ideal If You Love...

GUlabrao Patil, who will bet ?; ‘These’ three rebel...

The security of Gujarat’s 1600 km long coastal area including...

BBMP under new school colleges under construction for Government Green...

Westmeath man jailed for raping and sexually abusing his younger...

How do you know if the eardrum is torn? IG News

What are the papers – 28 June IG News

Public and private load shedding across the country has made people’s lives miserable IG...